In the Rearview: The Life and Times of OKC’s Most Notorious Bootlegger — Part 3

by Lynne Rostochil.  Photos from the Oklahoma History Center unless otherwise noted.

This week, Lindsey gets into all kinds of trouble.  (If you’ve missed past posts, go to Part 1 and Part 2.)

It was 1947 and Lindsey Chambless was now married to the widow of the man he had recently murdered with his deer rifle during a drunken brawl.  Here, Lindsey (center) is being arraigned for the murder of fellow bootlegger, Bill Eltzroth: 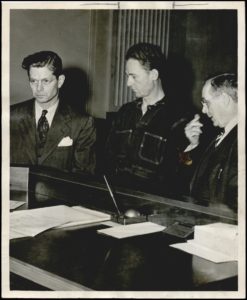 Maybe Lindsey married Eltzroth’s widow, Stella so that she couldn’t testify against him during his upcoming murder trial.  Or maybe she told him that he could atone for his sin by meeting her at the altar.  Whatever the reason, between the marriage and the murder, Lindsey was trapped … and he didn’t like it.

Soon after the wedding, 32-year-old Lindsey took up with his wife’s now 18-year-old daughter, Mary Lou, who became pregnant with the couple’s child. The following year, 1948, was a busy one for Lindsey — Mary Lou gave birth to their son, Lindsey and Stella divorced, and the bootlegger kept it all in the family by marrying the mother of his baby.

During this time, Lindsey was also convicted of manslaughter in Bill’s death.  Here’s a photo of Lindsey’s deer rifle being investigated by County Attorney, Warren Edwards and his deputy, George Lipe during the trial: 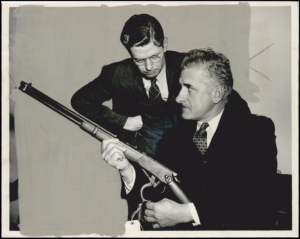 Still out on bail, he appealed the case and continued his bootlegging ways until his case could be heard.  Not long after his near-bust on September 7, 1948 by the Longacre twins at Tulakes Airport, Lindsey encountered the determined lawmen again.  On November 29, 1948, the lawmen were on hand when two planes landed on a dirt airstrip located at NE 63rd and Bryant in rural Oklahoma City.  They witnessed four men unloading cases of whiskey onto a truck and into a car and busted them as they left the field.  The scene may have looked something like these busts captured by the Oklahoman: 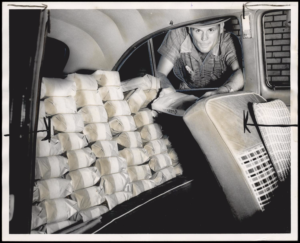 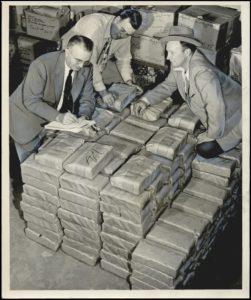 When he was being arrested, Lindsey glibly offered the brothers 35 cases of whiskey “to forget they ever saw him,” but the incorruptible officers refused and added to Lindsey’s existing troubles by booking him for bootlegging.

His streak of bad luck continued when, the following summer, the “Flying Bootlegger” cracked up one of his planes as it came in for a landing, and he left it empty and abandoned in a ditch just off of the field at the old Wiley Post Airport: 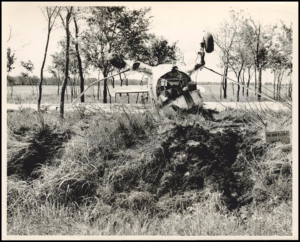 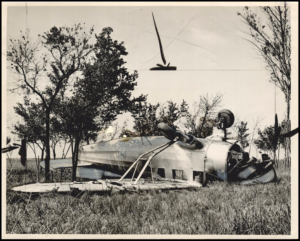 “City Plane Skids Into Limelight Again. Plane belongs to Orville Lindsay Chambless, city bootlegger. This plane is well known to Oklahoma county law enforcement officers. They have tried to seize it several times because they said it was hauling whiskey. It cracked up early Wednesday at Wiley Post airport.”

In what sounds a lot like this incident, OKC native, Jim Shaw recalled:

I remember one incident (I think I was still in grade school), when a bootlegger overloaded his plane & attempted to takeoff to the south after dark.  He got off the ground, but failed to clear the line of trees on the south side of Britton Road.  Word spread throughout the neighborhood like wildfire & all the dads rushed to the scene….  Everything that wasn’t broken was cleaned out before the police arrived. I don’t know what became of the bootlegger.

At the time, the airport was located at Britton and May — here’s the view looking from May toward Lake Hefner: 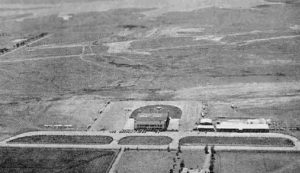 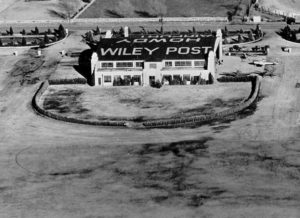 To give you an idea of what the airport and surrounding area was like back in the late 1940s and into the ’50s, one Squadder who grew up in the area at the time recalled, “Back then, it was all country out here.  Dirt roads, tumble weeds.  … my friend, Betty, and I were at the airport a lot. Her dad owned it.  My brother and I went there often, also, to climb around the war surplus airplanes scattered on the field.  I have no idea how many planes were there, but we sure had fun climbing up in the cockpits and facing off against each other in our own plane and playing like we were shooting each other down.  I can remember, yelling at the top of my lungs, ‘take that, you dirty Jap.'”

Two months after Lindsey’s plane ran off the runway, he and one of his pilots, Pete McGinnis, discovered that another of the bootlegger’s planes had been slashed to pieces, likely by a rival gang.  That’s our bootlegging pal on the left in the photo: 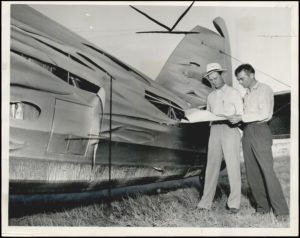 Lindsey’s bad luck didn’t change when, in March of 1950, the bootlegger learned that he had lost his appeal and had to serve his three-year manslaughter sentence.  Like Corky before him, Lindsey decided that running away was a better idea than facing the law, so he jumped his $3,000 appeal bond and took off to Mexico, leaving Mary Lou and his now two young tots behind.

Authorities posted a $1,000 fugitive bond and guessed that Lindsey had gone to Mexico City to settle yet another of his troubles involving a plane.  One of his frequent pilots, Oklahoma City barnstormer, Al Guthrie was languishing in a Mexico City jail after being busted for “smuggling $12,000 worth of lace on which duty had not been paid.”  Guthrie argued that he just stopped in Mexico City to refuel on his way to Guatemala where he planned to pay for the lace, but authorities didn’t buy his story.

Lindsey wasn’t the generous friend the authorities thought he was, however.  Instead of fighting to save his friend in Mexico, police found and arrested him in Fort Worth in April and returned him to Oklahoma City: 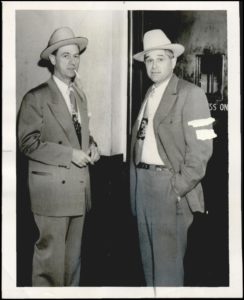 Finally, three years after he aimed his deer rifle at Bill Eltzroth, Lindsey was serving time for the crime.

Two years later, in May of 1952, Mary Lou and her toddlers excitedly greeted Lindsey when he was released from prison.  Instead of learning his lesson and going straight for the sake of his family, however, the career criminal was soon back to smuggling whiskey and anything else he could think of.  Within a few short months, the “Flying Bootlegger” would encounter a more sinister kind of trouble than he had ever known before, trouble that would culminate in murder.

Lindsey and the Cuban Connection

The wild story began when legally elected Cuban president, Carlos Prio Socarras was deposed by U.S.-backed military dictator and former Cuban president, Fulgencio Batista in 1952.  Here are photos of Socarras (above) and Batista (below): 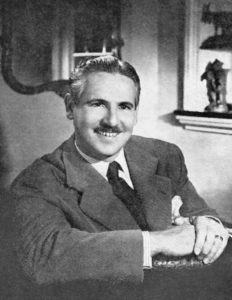 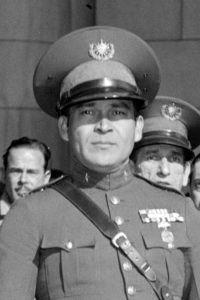 Socarras fled to New York City, where he holed up in an upscale Manhattan hotel and plotted his triumphant return to power.  To get the ball rolling, the former leader invited three fellow refugees and loyalists, Candido de la Torres (49), Manuel Fernandez Madariaga (38), and Jose Duarte (33) to meet at his hotel.  Once there, the four men hatched a plan.  Socarras gave his cohorts $240,000 (over $2.2 million today) to purchase as many arms as they could.  The dissidents would then distribute the guns to fellow loyalists and together, they would return to Cuba and take back the presidency for Socarras.  The far-fetched idea sounded good … at least in theory.

After leaving Socarras, the three refugees travelled to Mexico City, where they connected with a group of American “businessmen” (i.e., gun dealers) who promised to provide them with the munitions they requested.  The group agreed to meet at the classy, newly-built Western Hills Motel in Fort Worth in a few weeks to make the exchange.

The large, W-shaped inn along busy Camp Bowie Boulevard in posh Ridglea Hills was a local hot spot for nice suburban lunches that probably involved lots of gelatin, cocktail parties where well-coiffed guests discussed the latest gossip, and, surely, illicit trysts that kept suburban life lively.  Here are some of the images that popped up when I Googled the motel: 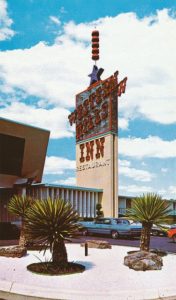 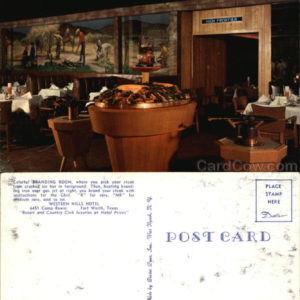 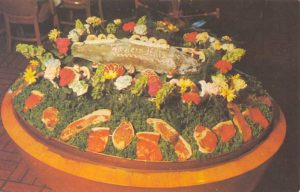 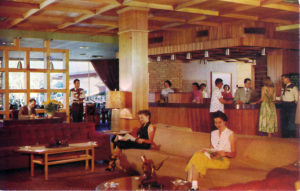 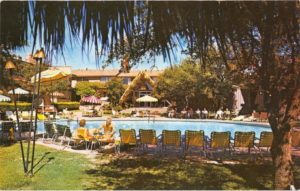 What a fabulous looking place, aye?

For those trysts and other private tête-à-têtes, guests could rent one of the private cabins that surrounded the motel: 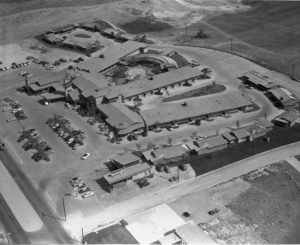 It was in one of these cabanas that the Cubans and their American dealers arranged to meet.

Two of the Cubans, de la Torres and Fernandez Madariaga, arrived at their nicely appointed cabana and were soon joined one of their American friends.  While waiting for the other Americans to arrive with the munitions, the three men decided to count the Cubans’ money to make sure it was all there.  Satisfied that the amount was correct, the waiting men passed the time by playing cards.

As evening faded into late night, the three friends were still playing cards when they heard a noise just outside the door.  Without further warning, the cabana door burst open to reveal two armed men, who quickly stormed into the room. The surprised victims drew their pistols, but their paltry arms were no match with the machine guns the bandits aimed at them.  Still trying to process what was happening, the Cubans turned to their card-playing American comrade and saw that his pistol, too, was pointed in their direction.  Knowing they were beat, the Cubans meekly dropped their arms.  The robbers ordered one of their victims to the ground and kept the other at bay while they gathered the $240,000 and an additional $8,000 that one of the counter-revolutionaries had on hand “to buy his wife a station wagon.”  (That would have been quite a car considering that $8,000 in 1952 would be nearly $75,000 today.)

The thieves stuffed the money, which was all in $100 bills, into a leather pouch and fled into the dark night.  Just as quickly as they arrived, the Americans were gone and all was quiet except for the sounds of distant traffic on Camp Bowie and other guests swimming and socializing in the motel pool.

Once they got over the shock of what had just happened, de la Torres and Fernandez Madariaga called the police to report the robbery.  Within hours, the Cubans’ initial contact man, used car salesman Sam Cresap, was in jail and a warrant was issued for Lindsey’s arrest in the theft.

Almost as soon as he learned about the warrant, Lindsey turned himself in to Oklahoma City authorities.  Although Lindsey admitted to making several trips to Mexico and knowing the Cubans, he adamantly denied any involvement in the robbery, claiming that, “the whole thing is a frame-up.  Sure I was offered a proposition, but I turned it down.  I’m not going to get tied up in anything with international complications.”

Lindsey claimed he could prove that he wasn’t in on the robbery, too.  “I have been in bed sick for two or three days and was in Oklahoma City when that robbery was supposed to have taken place.”  He even offered to call his doctor to the police station to vouch for him, then angrily stated, “I’ll make those guys (the Cubans) catch a rabbit when I get back to Fort Worth.  There’s something rotten someplace.  I think I know what they did with the money.  They’re not going to make me the goat.  This is one time I’m not guilty and I’m going to yell like a panther.”

Once again, Lindsey claimed that the “deal was too big for me” as he was led off by FBI agents to be charged with being the trigger man on the job.  However, after a long interrogation in which the bootlegger told all he knew about the arms deal gone awry, the authorities released Lindsey on a $5,000 bond and the case against him soon collapsed.  He ended up going to Fort Worth to testify before a Texas grand jury and then he was free.  Here are the Cubans at the same hearing: 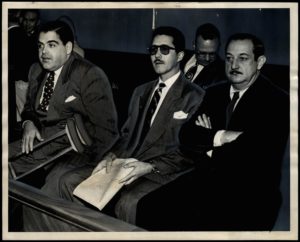 Apparently, ole Lindsey was innocent after all … but no one likes a squealer.

Next week, in Part 4 of our series, Lindsey goes missing and there are all kinds of suspects.