With a newly minted driver in the house, the topic of being safe behind the wheel has been at the forefront of many conversations with my teenager over the last year.  I’ve also regaled him with stories of taking driver’s ed back in the early ’80s, where I had fun using ancient driving simulators that, no joke, looked like this: 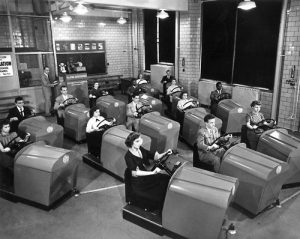 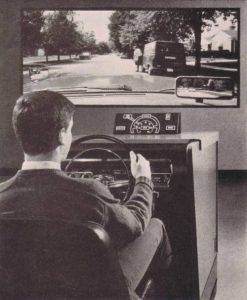 My high school was built in 1961 and the simulators must have been purchased then and used for well over 25 years.  Another memory of driver’s ed was the fear and terror of having to sit through such horrors as “Mechanized Death.”  The thing that was so bad about that was that my driver’s ed class was 4th period … lunch time.  We’d go eat lunch and return to have to watch blood and guts and crunched up cars for the rest of class, which wasn’t the least bit fun.

With all of the talk about driver’s ed over the last year with my son, it’s perhaps no surprise that I was immediately drawn to this instruction manual from 1955 when I spied it at an antique store recently. 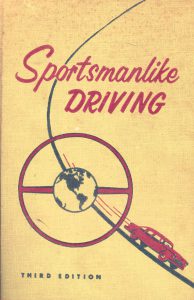 Of course, there has to be the requisite declaration of love on the first page: 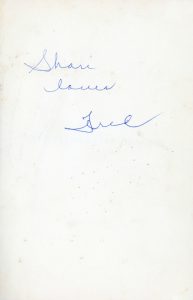 Shari must have really loved Fred a lot because there are little hearts and “FC + SS” throughout the book … except, mysteriously, on the last page of the index where she wrote “SS + DD”.  Hmm, wonder what happened to ole Fred….  Anyway, the book contains some great illustrations to enhance its message about driving while sleepy or under the influence: 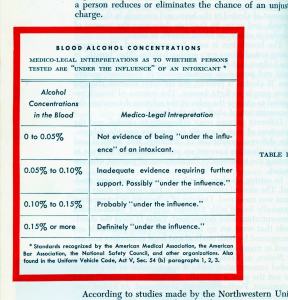 Yep, this is when most states didn’t prosecute if a driver’s blood alcohol level was less than 0.15% as established in 1939 by the National Safety Council and the American Medical Association.  That’s nearly twice as high as the legal limit of .08% now.  Yikes!

In addition to discussing driving while fatigued or drunk, the book discusses the practical aspects of being behind the wheel, like stopping distances: 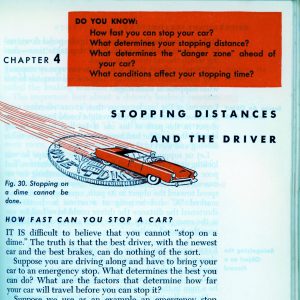 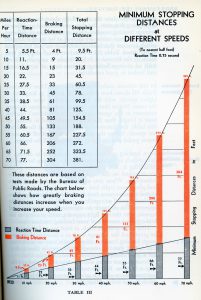 This guy is not a nice and thoughtful stopper, apparently: 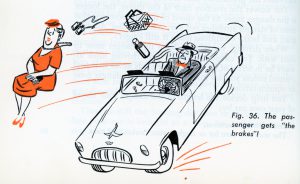 Chapter 5, “The Psychology of the Driver”, is my favorite.  Meet some of the people who the book deems as bad risks. 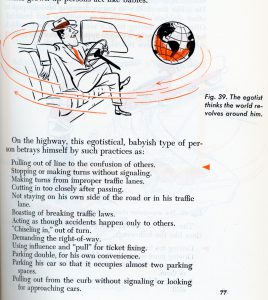 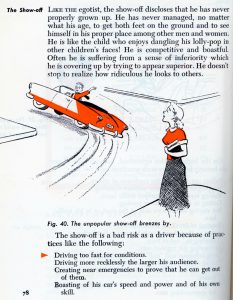 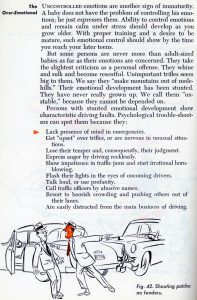 The Rationalizer and the Thwarted: 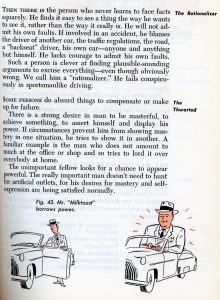 Who is the Thwarted, you ask?  Well, here’s a description of this driver:

Some persons do absurd things to compensate or make up for failure.  There is a strong desire in man to be masterful, to achieve something, to assert himself and display his power.  If circumstances prevent him from showing mastery in one situation, he tries to show it in another.  A familiar example is the man who does not amount to much at the office or shop and so tries to lord it over everybody at home.  The unimportant fellow looks for a chance to appear powerful.  The really important man doesn’t need to hunt for artificial outlets, for his desires for mastery and self-expression are being satisfied normally.

Wow, that’s intense … makes me wonder if Shari fell out with poor, milktoast Fred (because, face it, the name Fred doesn’t conger up images of the star athlete in school) for the much more confident sounding “D.D.”

Love this one instructing future drivers to “keep power under control.”

The second half of the book moves away from the psychology of driving to the act itself and begins by familiarizing students with gauges and devices on most cars.  Here’s the illustration for all of the gadgets on a manual transmission car: 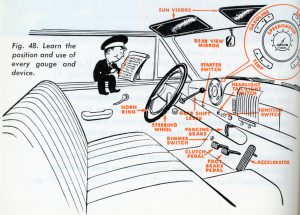 There is even a big section of instruction about engine parts… 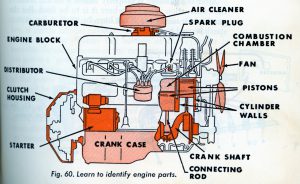 … and the rest of the makings of a car.  No computers here: 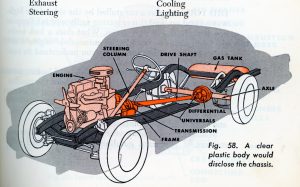 I really love this one: 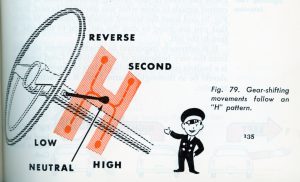 I drove a beat up 1972 Chevy pick-up with “three on the tree” when I was in my ’20s  — looked something like this but with tons of rust and more than a few dings not caused by me: 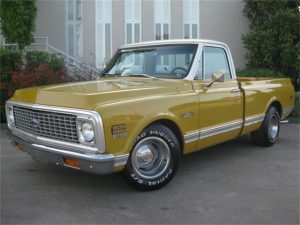 I still miss Old Yeller.  Anyway, as anyone growing up “back in the day” (whenever that was), you know that even more terrifying than “Mechanized Death” was knowing that your entire driving career … and thus, social life … hung in the balance with the dreaded parallel parking task on the driver’s test.  Fail that and fail the entire test. 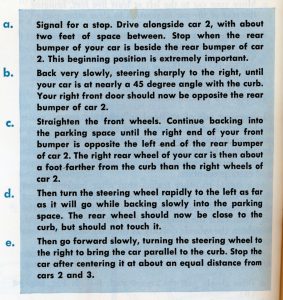 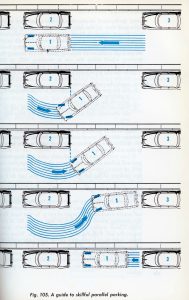 Looks so easy, but so many people had to take the driver’s test two, three, or four times before they passed and all because of parallel parking.  That’s not the case now; otherwise, I think my kids would never have gotten a driver’s license.

This image just made me giggle — she’s got a pretty good “Oh shit” expression on her face as she’s trying to figure out this crazy graphic. 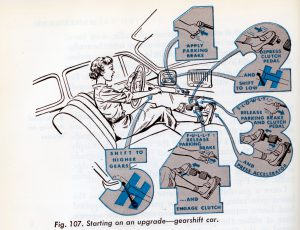 And, this one make me very happy for anti-lock breaks and 21st century technology: 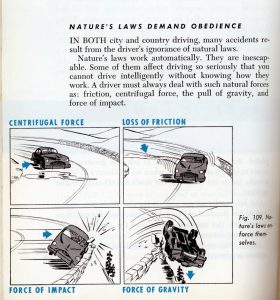 I doubt this has changed much in the last 60 years… 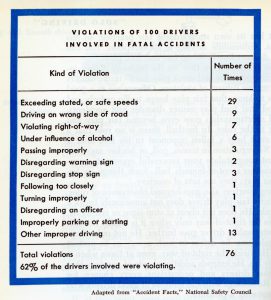 … but I guarantee that very few people are following 120 feet behind the driver in front of them when they are driving 60 mph: 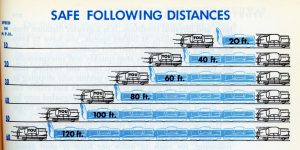 And watch out for those pedestrians! 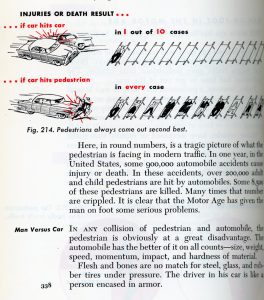 Well, that concludes our tour of driver’s ed ’50s style.  Be safe out there!