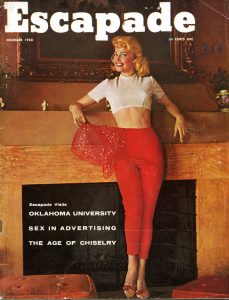 Recently, I came across a December 1958 issue of Escapade, a pretty tame-by-today’s-standards gentleman’s magazine that I had never heard of before.  From what I can tell, it was around from 1955 through the early 1980s and several prominent authors, humorists, and thinkers of the day contributed stories/columns to the magazine over the years — so maybe some men really did buy the publication for the articles, much as they claimed to do with Playboy, which was launched less than two years before Escapade.  Anyway, fresh off of his success with On the Road, Jack Kerouac contracted with the magazine to write a monthly column, “The Last Word,” in 1959 and 1960 — more about that here.

While the issue I found doesn’t include a Kerouac column, it does boast a pretty sexist article article by Phil Silvers during his Sgt. Bilko days entitled “The Age of Chiselry” about how women so easily manipulate men.  There’s another one about burlesque in Japan with the very politically incorrect title, “Take it Off! Prease.”  No, really!

Even with all of that, the best part of this fun ’50s find is that it features a very interesting, G-rated article about campus life at OU, so of course I had to snap it up and share it with the Mod Squad!

Written by OU student Bill Whitworth, the article provides a fascinating look at campus social life and rituals of the day.  Click a photo to enlarge the text and enjoy the read: 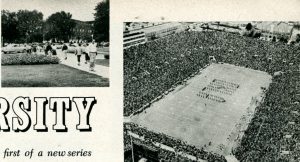 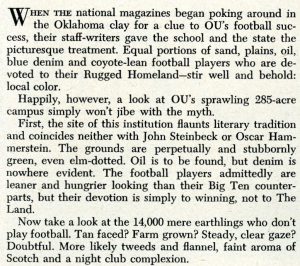 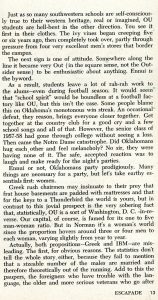 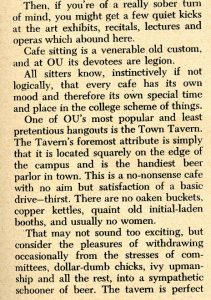 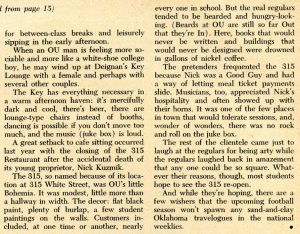 Of course, there are a lot of photos that accompany the story, including this funny one of a student getting dunked for not wearing western wear during Frontier Weekend … is there even a Frontier Weekend at OU anymore? 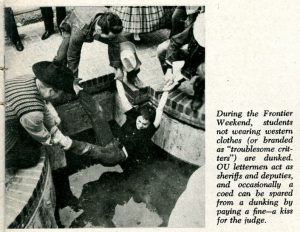 These are pretty great, too: 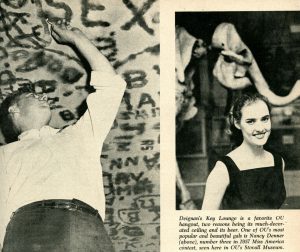 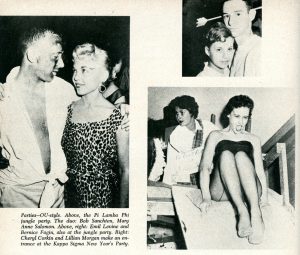 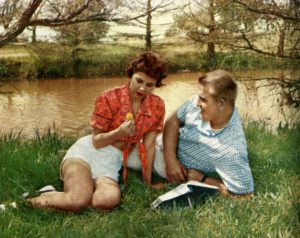 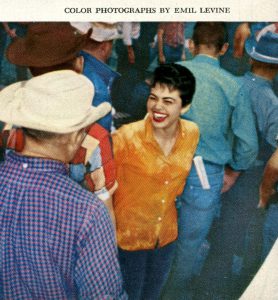 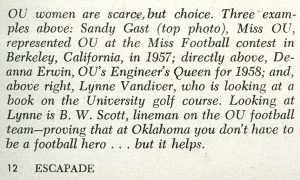 With all of the names and places in this article, I thought it would be fun to follow up and see what happened to the people mentioned in the story.  Here’s an update:

Bill Whitworth: This guy has done some cool stuff.  He was editor of the Oklahoma Daily, OU’s newspaper, during his senior year while he also worked part time for the Oklahoman.  After graduation, he took off for the Big Apple to work for the New York Herald Tribune, where he covered The Beatles’ triumphant first visit to the U.S. in 1964, RFK’s run for the Senate, and the burgeoning anti-war movement.  In 1966, he moved to The New Yorker magazine as a writer and became an associate editor in 1973.  From there, he went to The Atlantic Monthly and worked as editor-in-chief for the venerable publication for 20 years.  Not a bad career!  Here he is during his Atlantic Monthly years:

Beauty queen Sandy Gast was from Bartlesville and modeled all through college.  She must have gotten married soon after graduation because I couldn’t find anything about her after that.

Deanna Erwin was from Henryetta and, as the caption states, was the 1958 Engineering Queen.  A dancer, Erwin and four other beauties from campuses across the country were selected as finalists for Sport magazine’s “Campus Queen.” Readers voted on the five beauties and selected Erwin as the winner!  I wonder what prizes she won — probably some pots and pans and maybe even an Electrolux vacuum cleaner to help entice an up-and-coming young man looking for his own personal June Cleaver.  Anyway, the magazine conducted the contest for several years and Erwin’s victory was the beginning of three in a row for OU — pots and pans for everyone!  I came across a photo of a behatted and very charming Erwin in the OPUBCO collection at the History Center that appeared in the Oklahoman advertising the 1958 Sooner Scandals: 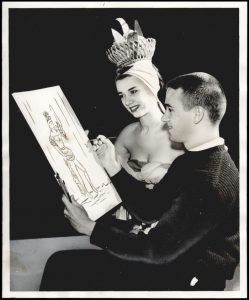 While I didn’t find out anything about Lynne Vandiver, I did learn that B.W. Scott was a lineman on Bud Wilkinson’s 1955 and 1956 championship teams during what would become a 47-game winning streak.  He later became Oklahoma City’s fire marshal.

I came up empty when searching for Bob Sanchten and learned that Mary Anne Salomon was the daughter of a Norman pediatrician but little beyond that.  However, I found some good stuff about Emil Levine, who had the tough assignment of taking the color photos for the article and who wrote for the Oklahoma Daily with Bill Whitworth.  He joined the Navy after graduation and ended up working in Intelligence for the Navy and, later on, the DEA.  There’s a very interesting article here in which he detailed his intelligence experience.

So, the guys have done some cool things and I wanted to find that the girls were just as adventurous.  Unfortunately, I didn’t find any info on Bernice Fagin or Cheryl Corkin, but I really wanted to find out something about Lillian Morgan, the spunky girl who looks like she’s on an impromptu slide wearing a sexy black corset and seamed fishnet hose.  Yeah, I like her! 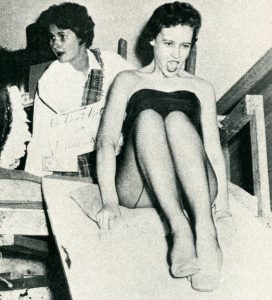 Well, I don’t think Lillian’s sass ever abated because she ended up becoming a beloved teacher at St. John’s and later at Casady, and we all know that you need a lot of spunk and sass to deal with kids all day!

I also hit the jackpot with lovely Nancy Denner, who was the second runner up in the Miss America pageant in 1957.  The drama major was quite the local celebrity and was even the subject of a lengthy feature in Sooner magazine during her years at OU.  Coincidentally, I bought several Kodachrome slides of a parade in Guthrie a few years ago, and two of them feature Nancy in all of her Miss Oklahoma glory: 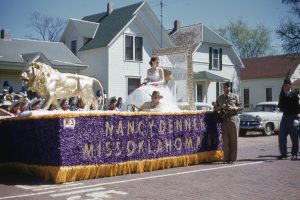 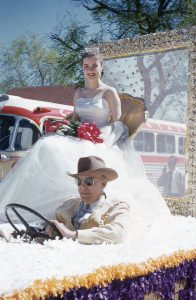 Bill Whitworth talks quite a bit about Deignan’s Key Lounge with its yummy beer and decorated ceiling (see photo above), but I wasn’t able to find out where it was located.  As for the other hangout he mentioned, the tiny 315 Restaurant where “regulars tended to be bearded and hungry-looking,” was torn down in 2013 and replaced with this building (photo by Pete at OKCtalk.com): 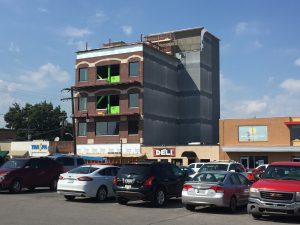 The article mentions that the 315’s owner, Nick Kuzmik had died and the beatnik hangout was closed.  I couldn’t find out any info on Nick and I don’t know if this happening spot ever reopened.

That’s it for Escapade’s look at OU in 1958 — pretty interesting, aye?  I will post the Phil Silvers and Japanese burlesque articles in a couple of days for you — they are good for a laugh and even an exasperated sigh.

On the Market: A Charming Storybook in Belle Isle Phil Silvers and Japanese Burlesque in Escapade Magazine
Click here to go back to previous page