Celebrating 60 Years: A History of the First Christian Church, Part 1

by Lynne Rostochil.  Photos from Lynne’s collection and the First Christian Church archives. 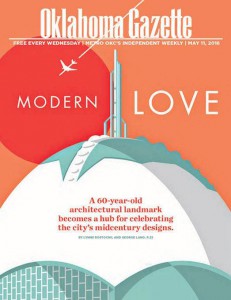 The following is an article I wrote for the OKC Gazette that was published 5/11/16.  I thought I’d include an extended version of the article along with a bunch of photos that weren’t in the paper here on the Mod Blog. 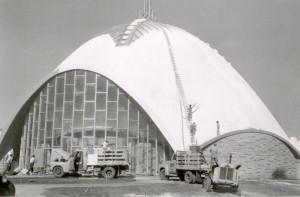 Any newcomer to Oklahoma City would surely take one look at the First Christian Church at NW 36th and Walker and automatically assume that the uber modern structure is a very daring but recent creation and would certainly be surprised to hear that this beloved dome has been part of our architectural landscape for a whopping six decades.  The gleaming white egg — or boob … or bulb … or whatever your favorite nickname for the iconic building is — still looks as innovative and fresh as the day a very determined Reverend Bill Alexander declared that he would build a true “church of tomorrow” right here in Oklahoma City.  And when the Reverend set on a dream, he always managed to bulldoze his way through doubt, criticism, and excuses to make it happen. 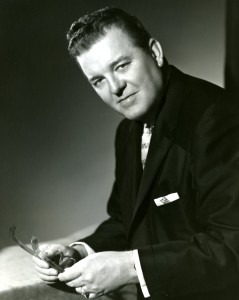 To say that Bill Alexander was quite a character is a vast understatement.  The son of a St. Louis pastor, Alexander grew up in the church but as most kids who want to make their own mark in life do, he cringed at the thought of following in his father’s footsteps.  Instead, the towering 6’5”, 200 pound youngster with the easy laugh and blazing red curly hair — which was about as easy to control as his desire for adventure — left home to pursue a career in show business as a Vaudeville emcee, musician, or just about anything that didn’t involve religion.  Somewhere along the way, though, Alexander came to the realization that church didn’t have to be stuffy and boring as he once thought – it could be filled with fun, energy, life — and even dancing! — if approached in a new way.  So, the prodigal son returned to the family fold, married his sweetheart, Charlsie, in 1935, and enrolled in college to become a pastor, but one in a new vein. 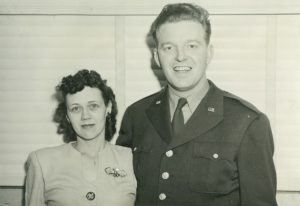 Charlsie and Bill during the war years 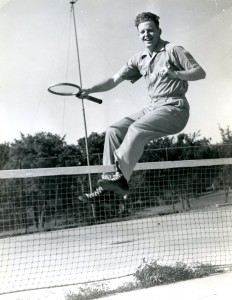 The lighter side of Alexander

While still a student at the University of Tulsa in 1935, Alexander volunteered to take over the helm and try out his then-revolutionary ideas as a student-pastor at the faltering First Christian Church in Stroud, which was down to a measly 34 members when he arrived.  Never one to sit around to wait for things to happen, the gregarious and fearless young minister went door to door in the tiny town along Route 66 to introduce himself and invite the community to church on Sunday.  Most said no, with one neighbor even declaring that his new church was dead.

Alexander seized on that and spread the word around town and beyond that the little Stroud church was, indeed, dead and he would be performing burial services for it on Sunday.  Well, of course, curious rubberneckers from all over the county came out to watch the spectacle and were greeted with a somber closed coffin at the pulpit.  The minister, who was always a showman at heart, then slowly creaked open the lid to encourage the crowd to pay their respects.  One by one, they moved to the front of the church and looked into the coffin … to see their own reflections in a mirror Alexander had placed inside.  Whether due to shock, guilt, or even a sense of humor, the trick worked and pews quickly began filling, so much so that the church boasted 600 members by the time Alexander left a few years later.

After taking time off for more studying then heading a church in Los Angeles for a year, Alexander found himself back in Oklahoma in 1942 as the new pastor for the First Christian Church in Oklahoma City.  Alexander had the charm of George Clooney, the sense of fun of Walt Disney, and the gusto of Ernest Hemingway, so it’s perhaps no surprise that the spirited new minister swept into town like an EF5 tornado on a balmy Oklahoma spring afternoon and quickly endeared himself to all. The congregation, which was located in an imposing neo-classical and gold domed relic at NW 10th and Hudson, was progressive but a bit like the aging structure it called home – a little tired and dusty. 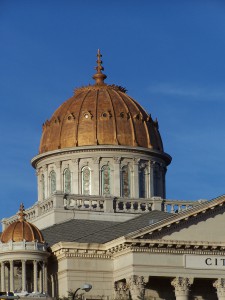 Alexander changed all of that when he began preaching that the church should be about more than glum Sunday services and a meeting place for wilted ladies clubs – it should be a haven for the young, with a plethora of activities to keep them busy and out of trouble.  Alexander first realized the need to appeal to kids while he was still in Stroud and met a young women who was pregnant out of wedlock, which was, of course, a huge taboo at the time.  Alexander later told Look magazine, “The minister of her church stood up in his pulpit on a Sunday morning and read her out of his congregation.  The girl’s friends treated her as if she was a degenerate.  One day she shot herself to death.  I don’t believe that to this day would the minister of that church admit that he had done wrong.”  According to the article, Alexander explained in the pulpit the next Sunday “how the girl’s normal desire for entertainment had led to her one of the local honky-tonks where she found rough company and trouble; and how the negative attitude of the church had led to her self-destruction.”  From then on, the minister committed himself wholeheartedly to the youth of his congregation.

To that end and much to the dismay of other, much more conservative places of worship down the street, he convinced church leaders to host dances, parties, and plays at the church in Stroud and at First Christian in OKC, too.  His congregation endorsed his ideas so much that, with donor dollars provided by church member C.A. Anthony, they constructed a bowling alley in the basement of the santuary: 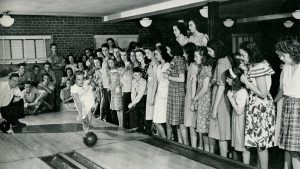 Soon, First Christian was swarming with teenagers and youngsters eager to join the church, have fun, and even learn a bit about God. 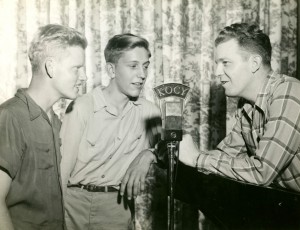 Bill Alexander and two of his young flock chatting on a KOCY radio broadcast, late 1940s

Even decades later, one of Alexander’s “kids”, Susan Hart, marvels at his ability to make each of them feel special.  “He knew every child by name and we all called him Bill because he was more of a friend to us than a leader.  If you ever had a problem and needed someone to talk to, his office door was always open and he was there eager to listen.  That kind of adult/child relationship was very uncommon back in the ‘50s.”

For a spell during the war, Alexander went to Italy as a war correspondent for OPUBCO and the Christian Press, and his articles appeared in Christian publications all over the country.  Here’s a fascinating and detailed Western Union telegram about the town of Cassino that he sent in April 1945: 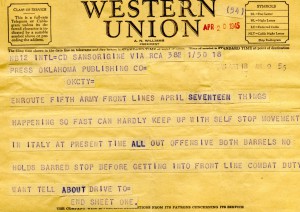 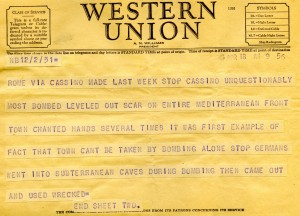 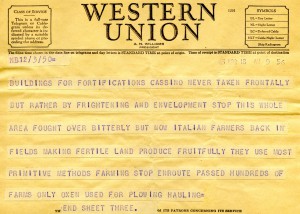 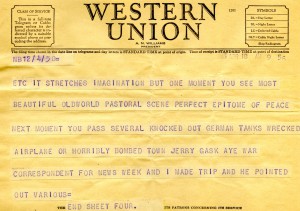 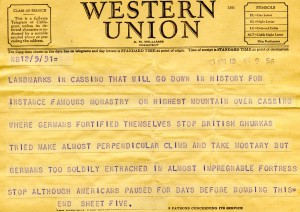 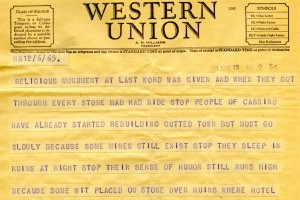 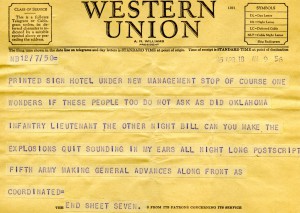 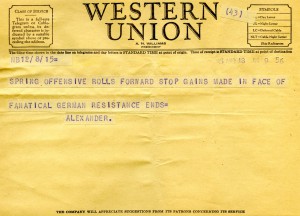 There are a few other accounts of Alexander’s that are equally as interesting that I will post for you history lovers out there in an upcoming Mod Blog.

After the war, people were looking to relax and have a little fun after years of struggling through the Great Depression and fighting Fascism overseas, and the gregarious Alexander was right there with his church doors open and ready to welcome all.  He even wanted to invite African-Americans into the congregation, but that was going a little too far for the all-white membership.  Instead, they decided to donate money to have a new church built in a nearby black community.

Meanwhile, the congregation planned cookouts, road trips, and other outings to make the church the focal point of not only their religious lives, but also their social lives. 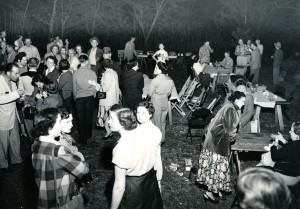 A church-sponsored Halloween party at Bob Axworthy’s house in the mid-’50s. 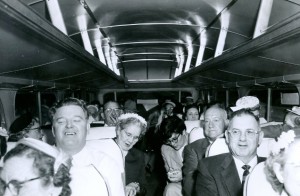 As always, Bill Alexander is the life of the party aboard a bus trip to Tulsa. 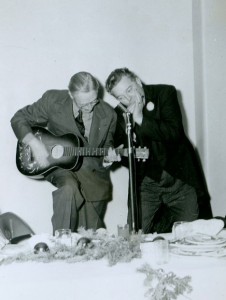 Alexander and associate pastor, Don Sheridan having a little jam session at a church function in the late ’40s.

Many ministers along Church Row were truly appalled by all of the fun going on at the First Christian Church.  One minister was so disgusted that he entered the church’s rec area just as Alexander was teaching some students how to do the Lindy Hop.  The minister wagged a finger at Alexander and scolded, “’Your day of retribution will come Mister Alexander.  On the Lord’s day, dancing, corrupting the young people in this community.  This is blasphemy.  Your job is to prepare these children to meet their God.’  ‘Brother,’ answered Alexander, ‘I’ll leave it to you and your church to teach them how to die.  You just let me and my church teach them how to live.’”  Apparently, momentarily muted minister stormed off in a dissatisfied huff, but many of his parishioners — as well as others from churches like his throughout OKC — were intrigued and gladly walked right through Alexander’s open church door and into one of the most progressive congregations in the nation.

Alexander’s great success entered a new realm at the end of World War II when he decided that it was time to create a building that would match the lively and spirited church he had created. He dubbed his vision “the Church of Tomorrow” and deemed that it would be a thoroughly modern and an inclusive place where all could gather to worship and play.  Now, he just had to find the land and someone with a similar vision to make his dream come true.

Opportunity came when the old Edgemere Country Club closed in 1946 and its 130 acres came up for sale. 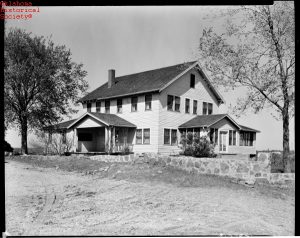 The land, which was owned by the state school land commission, had been leased to R.Q. Blakeney, Jr., for 20 years for the golf course and at one time in the mid-1930s, it was cited as a potential location for a new fairgrounds complex.  Obviously, that didn’t happen and the City announced that the golf course property would be offered for sale in May of 1946.  Here are some fascinating aerial views from Oklahoma Historical Society of the site before it was developed: 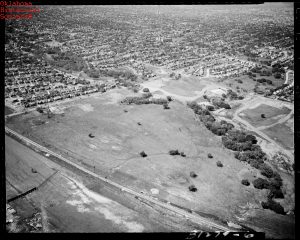 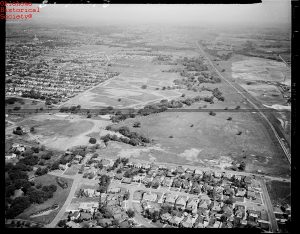 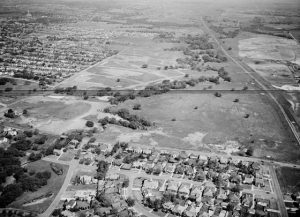 Seeing that his grand dream could, indeed, become a reality, Alexander pleaded, promised, charmed, and cajoled the congregation to snap up 40 acres of this prime strip of land near downtown for the new church.  They agreed, and although Alexander thought the congregation could get the parcel for $117,000, it ended up costing a whopping $315,000.  Although it was way more expensive than anyone anticipated, Alexander had his land and was anxious to move forward with his plans to create his glorious “Church of Tomorrow.”

Next week, the massive undertaking of acquiring the land and building the Church of Tomorrow.