Last week, a few Squadders were in Palm Springs for Modernism Week and attended a lecture about George Nelson.  The presenter mentioned that this iconic designer created a gas station for Kerr-McGee, which was built somewhere in OKC (click for a larger view): 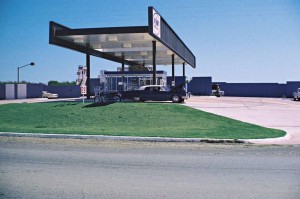 The caption with the photo on the George Nelson Foundation site states that, “the ceiling of the gas station was intended as protection and at the same time to create a brand identity. This was supposed to make the colorful signposts typical of gas stations superfluous.”

Curious, the Squadders asked if I knew anything about this little-known Metro history — the presenter hadn’t been able to find more information, but now I was curious, too, and wanted to learn more.  First stop: the Oklahoman archives, where I hit a brick wall — nothing, nada.  Then, I looked through my ’70s phonebook and found several K-M stations listed.  I started Googlemapping them with no luck because it looks like almost all of the original buildings are long gone and have been replaced with On Cue’s, Conocos, Valeros, and the like.  Then I thought about the 1969 aerial map over on OKCTalk’s website.  Unfortunately, all I found on those maps were a bunch of indistinguishable rectangles and squares.  Darn!

I then opened it up to the Mod Squad and also to the Forgotten Oklahoma group on FB.  There was a lot of speculation in both groups but nothing concrete until Rex posted this photo of a Nelson-designed station in Wisconsin: 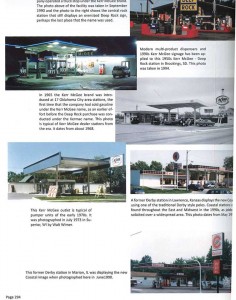 Surely, if one was built in Wisconsin, there had to have been others constructed in K-M’s home state of Oklahoma, right?  So, I headed over to the Oklahoma History Center site, where I FINALLY hit the jackpot.  Woo hoo!  First, I found a model of George Nelson’s station in the Kerr-McGee Corporation Collection: 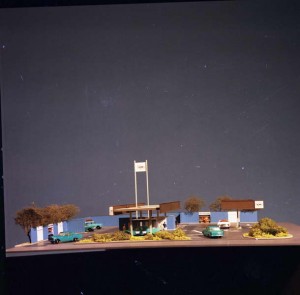 Yep, that’s it!  This photo of the model was taken in December 1968 and the caption stated that this was a proposed design but didn’t list any locations.  Then, I found this great image that was taken in the summer of 1970 for a station along the interstate in Okemah: 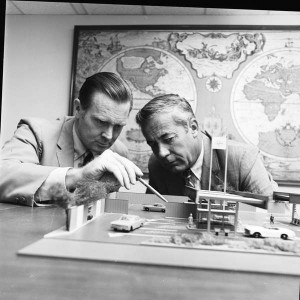 How great is that?!  Looking at Okemah on Googlemaps, there’s only one exit where this station could have been located, and three stations that are there now could have been the original location for this Kerr-McGee.  A Shell station on the south side of the highway is very intriguing because the station is under the awning as in the Nelson design.  There’s also a Valero just off of the highway to the north.  Finally, there’s an abandoned station a little further north that could be what we’re looking for.  Once again, the building is under the very long awning.  I’m going to have to go to the library and look through an old phonebook to determine exactly where this station was.

I also found this model from 1976 in the K-M Corporation Collection: 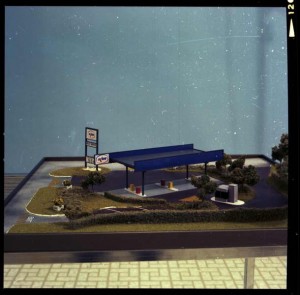 This station was to be built at the corner of NW 36th and May, but I’m not sure if it was ever constructed because this station was on the site in 1980: 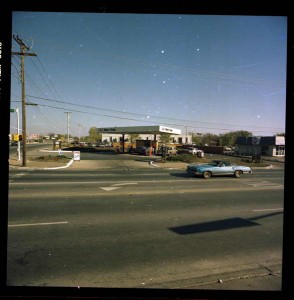 A Valero station now sits on the corner.

The Nelson design was transformed once again in 1981 when Kerr-McGee decided to try out a new concept: drive-thru paying: 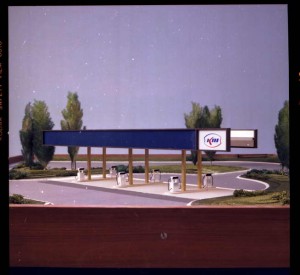 In the days before credit card machines on gas pumps, this was the ultimate in convenience.  Customers could simply drive up to a building that stood away from the pumps to pay.  The concept was implemented at a station at NW 63rd and the Broadway Extension and opened in 1983, as you can see in these OPUBCO Collection photos: 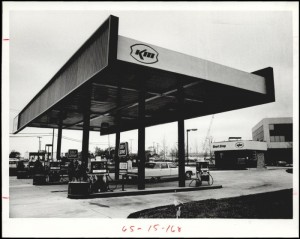 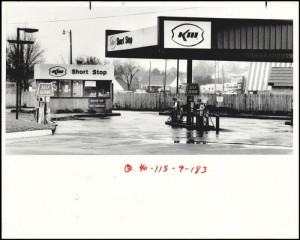 The Nelson awning has gotten a bit chunkier on the short side, but the longest part of it is pretty close to the master’s original design.  Unfortunately, as with most of these stations, this one is gone and has been replaced with a convenience store/gas station.

I found one last photo in the OPUBCO Collection of a Kerr-McGee awning that toppled during a storm in 1993.  It may not have been an original Nelson design, but it certainly paid homage to it: 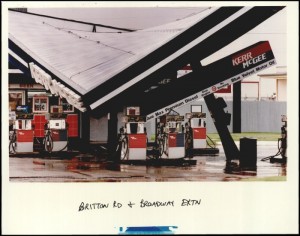 Like all of the others, this gas station, located at Britton and the Broadway Extension, has been replaced.

So, although it doesn’t look like any of George Nelson’s Kerr-McGee stations remain in the Metro, it is obvious by looking at the images of the designs that replaced them that his huge, protective awnings were a big hit.  Most stations built these days have tall, long, and giant awnings that aren’t nearly as elegant as Nelson’s but are certainly as effective.

And it all started here in OKC….

On the Road: The Johnson Wax Building and Wingspread Oklahoma Today and the Bedazzling Bruce Goff
Click here to go back to previous page