When it was completed in 1962, St. Patrick’s Catholic Church created quite a sensation, especially when architectural photographer Julius Shulman came to town to take pictures of this elegant piece of modernism then shared his images with various publications upon his return home.  The editors of Progressive Architecture were smitten and decided to put one of Shulman’s amazing images on the cover of the November 1963 issue: 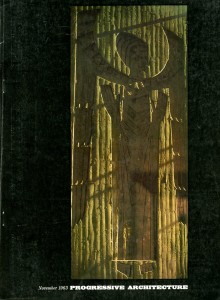 Considering what happened later that month — the assassination of John F. Kennedy in Dallas — it seems very appropriate in hindsight that this issue was dedicated to the nation’s newest and most modern religious meeting places, many of which, I’m sure, hosted the grieving nation during those sad and confusing winter days back in 1963.

On a more positive note, here’s the accompanying article about St. Pat’s and more of Shulman’s beautiful images of this OKC icon: 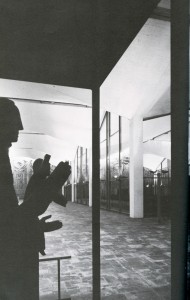 Although this church is very “expressive of its time” — considered by the architects to be one of the more important design objectives — its concept is strongly rooted in liturgical tradition.  Until the end of the Middle Ages, an entire parish could assemble on Sunday in a single act of worship; at St. Patrick’s this is again possible, with a nave that seats 500, and surrounding aisles (sheltered and screened but not fully enclosed) that accommodate another 1200 parishioners on important feast days.

There are other medieval antecedents.  “It has been suggested,” state the architects, “that the unusual feeling of a holy space is forcefully demonstrated by the Gothic cathedral because of it exaggerated scale.  The dramatic use of this space simply overpowers the individual….  But unlike the Gothic cathedral, which arranges unused space vertically, St. Patrick’s lays huge space horizontally to permit the parish worship which has been such a force in the liturgical life of the people.”

Another translation of medieval form is the concrete roof, which recalls stone vaulting but is executed here in the technology and aesthetic of today.

Actually, as one approaches the church, little of this medieval mood is apparent.  The church presents a boxlike exterior to the public; surrounding the huge interior space are free-standing walls of concrete, the tilt-up panels separated by redwood louvers.  This facade is in sober contrast to the riot of suburban honky-tonk along the major streets that border the site, and in distinguished contrast to the “rather nondescript existing buildings” — convent and classrooms — on the site itself. 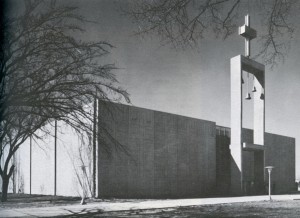 At night one can see the lighted ceiling from outside, through the louvers, but it is only from inside the church, as if only to the true believers, that the space and structure are fully revealed.  In plan, the church is of an Early Christian simplicity, reminiscent of the elongated rectangle with side aisles that developed from the Roman basilica.  “The location of the baptistery and the narthex, like those of the early church, emphasizes that through the sacrament of baptism one enters the Christian life,” say the architects.

Upon entering the church, one is immediately aware of the unique sense of enclosure — it is a space, not a room, and suggests a cloister, a roofed courtyard.  The concrete umbrellas, despite their association with more mundane shelters of today, have strong religious overtones.

Ten umbrellas, each formed by four hyperbolic paraboloids, cover the total area of 120′ x 180′; their design is similar to Candela’s Rio warehouse in Mexico City (see July 1955 P/A).  Through the careful control of natural light — the umbrellas are articulated by strips of skylights — the architects have tried to establish a relationship between the individual and the larger space similar to that in the awesome Gothic cathedrals.

The enclosed building area is defined by glass between the columns of the inverted umbrellas.  Sliding glass doors permit the congregation to move directly to the altar from the outer aisles.  Only the inner space has pews, and is heated and air conditioned, although lighting and sound systems are identical for both areas.  The importance of the altar in the liturgy is underscored by its accessibility from all sides; it is elevated and further emphasized by the contrasting wall behind it and the crowning canopy above it.

The church was awarded the Cardinal Lercaro Gold Medal in 1962 by the North American Liturgical Conference as the outstanding Catholic church built in the country during the past three years.  Among other honors was one of four equal awards given by the National Council of Churches and the Church Architectural Guild of America in 1963. 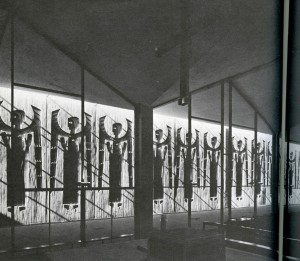 In the “development of space, lighting, and art which dramatically suggests the atmosphere of a holy place,” the architects sought to recall the Dedication Mass: “This is a fearsome place; it is the house of God, the gate of Heaven.”  One of the most compelling elements is the procession of huge angels along all four sides of the interior.  Although they echo the monumental sculpture of medieval times, these angels were not individually and laboriously cut from stone but cast from molds. 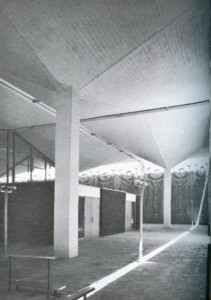 Didactic purposes have given way to the more purely decorative — and to the financial.  Frank Kacmarcik, the liturgical consultant, designed the angels and altar canopy, among other works. 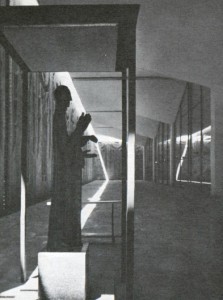 Gerald Bonnette did the sculpture for the devotional shrine; Josef Albers designed the dossal.  Simplicity and symmetry of plan emphasize the two liturgical focal points of the parish church — the baptistery… 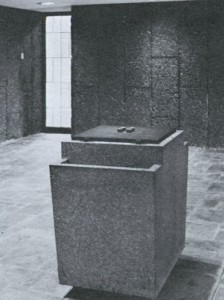 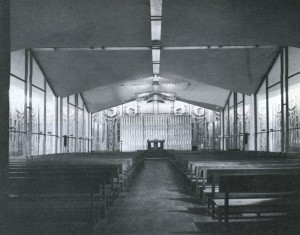 The interior is subdued; the only color is in the natural materials.  Flooring is a local stone, rust in color; baptistery walls are precast concrete with exposed aggregate of black marble; Albers’ wall behind the altar has gold leaf on alternating faces of the rough concrete block.  Parishioners themselves did a part of the work, reducing costs 20% by such jobs as cutting and laying the flooring, fabricating the redwood louvers, and casting the bas-relief angels. 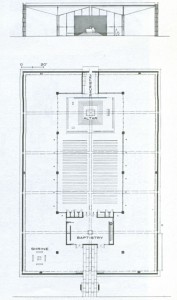 The history of the building of St. Patrick’s is pretty fascinating and is well worth the read.