God Mod: The A-Frame Magic of the Lutheran Church of Our Redeemer

When my friend (and fellow Mod Squad member) recently moved out of state, he suggested a day trip as a nice going away treat. I immediately knew where we should go: Cushing. I’d never been and was excited to see the different structures designed by their hometown hero, A. Blaine Imel. We arrived around noon on Sunday and services were just letting out at The Lutheran Church of Our Redeemer. Humbly asking if we could photograph the interior, the pastor opened the door and provided a warm reception and lots of interesting information. Because we got so much on the church, there will be another blog in the future with more Imel history and other structures.

The site of the current church was chosen because it was next door to the original parsonage. Back in the day, they had moved a different building they were using for services to that spot to be in closer proximity. But by the mid-century they had outgrown that space and it was demoed for their new Imel design which was completed in 1957.

The exterior has a lot going on and, though I’m not sure what Imel’s inspiration was, the imagination does tend to find similarities to objects religious and otherwise. Looking straight at the front, you can see a popes pointed hat or one of the more extreme nun’s caps. The brick pillars of graduated heights could be reflective of the organ pipes. 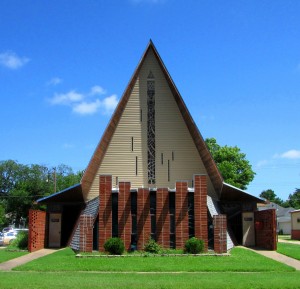 A side view shows the beautiful angles of the roof and the graduated skylights all leading your eye to the heavens. 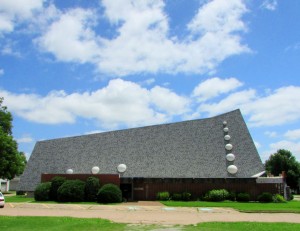 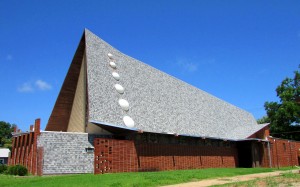 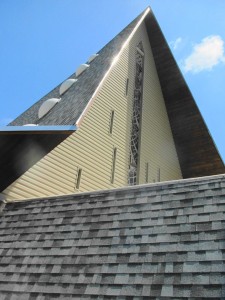 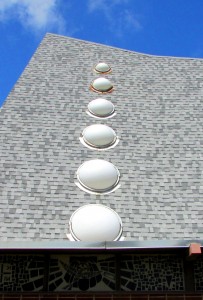 As soon as we entered the sanctuary, the warmth and welcome of the parishioners was exceeded by the warmth of the space. Granted, much of the exuded warmth is due to the consistent use of wood, but there really is a psychological magic to the A-frame. It is basically a triangle, after all, which is a shape with much spiritual connotation. 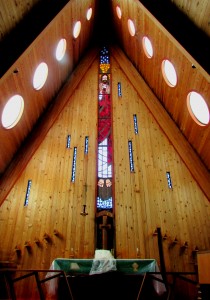 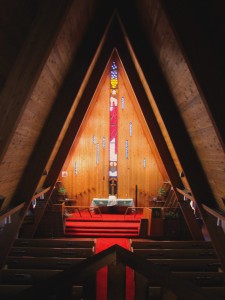 This state has at least one other beauty that shares the same A-frame magic: St. Timothy’s Episcopal in Pauls Valley (1964) which could have been paying homage to its sister here in Cushing since it was built seven years later.  We’ll be posting a photo essay devoted to St. Timothy’s soon so you can see what you think.

So many thoughtful touches make this space a real gem: the channeled surfaces to the wood walls and ceilings: 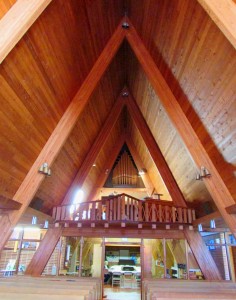 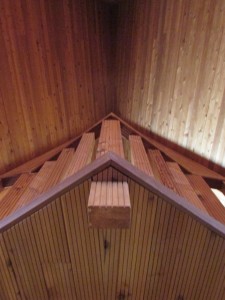 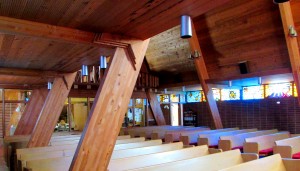 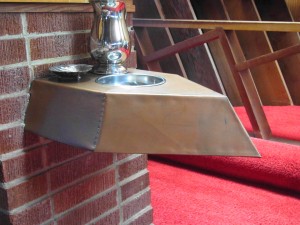 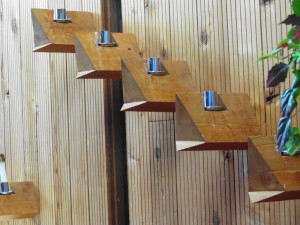 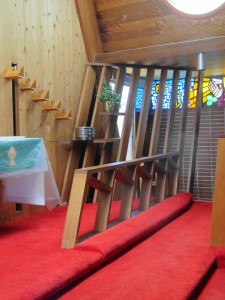 and the surprising, even whimsical round skylights. 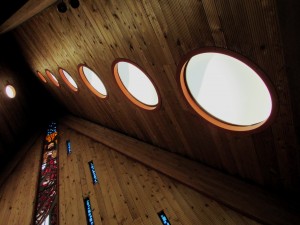 Also, we were privy to original blueprints, 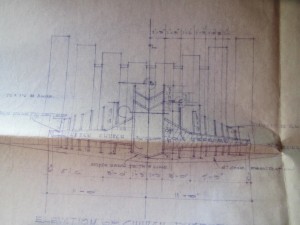 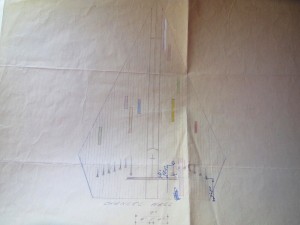 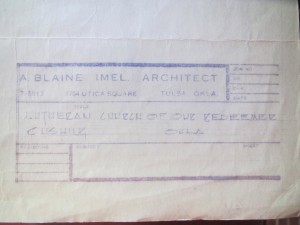 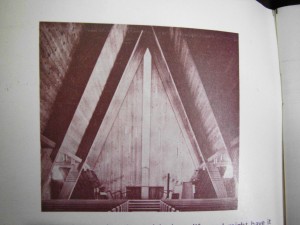 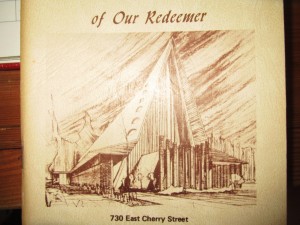 We also had access to an A.I.A. journal, Tim Press, that features the church: 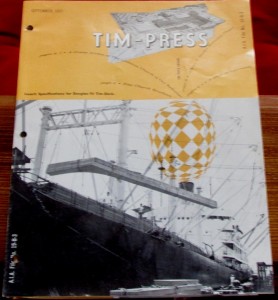 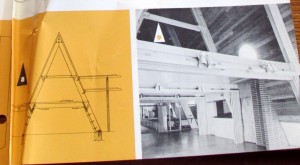 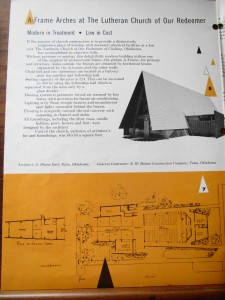 The excerpt from the periodical is quite wonderful:

Frame Arches at The Lutheran Church of Our Redeemer. Modern in Treatment. Low in Cost. If the purpose of church construction is to provide a distinctively impressive place of worship with necessary physical facilities at a low cost, The Lutheran Church of Our Redeemer of Cushing, Oklahoma, has accomplished its objective fully. Without pretense or apology this delightfully modern building utilizes one of the simplest of architectural forms – the glulam A-Frame – for primary roof structure. Aisles outside the frames are obtained by horizontal beams supported by the A-frames and the outer walls. Choir loft and two classrooms are located in a balcony over the narthex and fellowship hall. Seating capacity of the nave is 224. This can be increased to 350 by using the fellowship hall which is separated from the nave only by a glass divider. Heating system is perimeter forced air warmed by hot water, with provisions for future air conditioning. Lighting is by Neon trough fixtures and incandescent spot lights concealed behind the beams. Flooring is integrally colored tile-red concrete with carpeting in chancel and aisles. All furnishings, including the altar cross, candle holders, pews, lectern and font, were designed by the architect. Cost of the church, exclusive of architect’s fee and furnishings, was $10.50 a square foot.

In the photo next to this entry the back of the church is shown with a fully glazed wall. That door would lead directly into the fellowship hall and, due to the intimate size (read “small”), would help it feel larger. Unfortunately, at some point the glass was removed and closed up probably because of weather or security concerns.

Another major change was the addition of pictorial stained glass. As you can see in the hand colored drawing with the blueprints, the openings originally had pastel glass. In the ’70s they commissioned a female artist to dress it up. There is still some original blue glass at the front end where the offices are located; however, it’s not in the best shape with many noticeable cracks.  Here are a few of the newer stained glass panels: 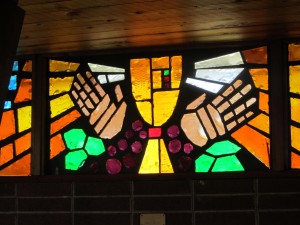 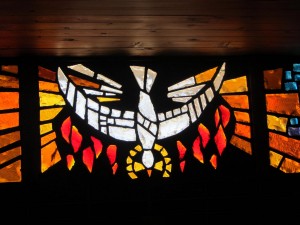 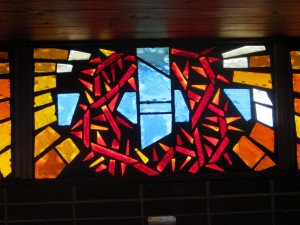 As we left and gave our many thanks, I was told that more recent growth had the congregation contemplating another move, but they love their Imel building so much they decided to demo the old parsonage instead and an annex for fellowship purposes is now being built on that site. It seems this fabulous structure will be safe for many years to come. 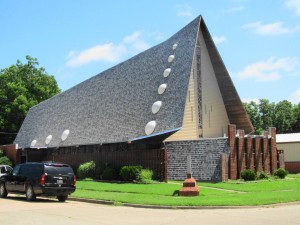