Searching for Modernism in Small-Town Oklahoma

One of my favorite pastimes is getting up early on a Saturday morning, grabbing my camera, heading with no particular destination in mind searching for things to photograph. Small town Oklahoma is always high among the best stops because these little blips on the map contain lots of waning downtown buildings and rusty signs (two of my favorite photographic subjects), but I sometimes get lucky and stumble across a great modern treasure in some of these tiny enclaves.

Here are just a few of the modern buildings I’ve found off the beaten path in our great state.

Once a bustling farming community, these days Ninnekah is mostly a sad ghost town with a convenience store, several boarded up businesses, and a few homes, including this mid-century residence on the outskirts of town: 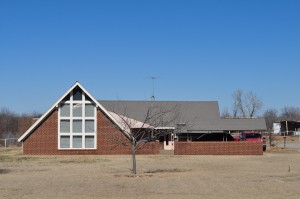 While all of the houses and commercial buildings are looking pretty tired, this abode that looks more church like than a residence, appears well taken care of and is the only bright spot in an otherwise dim-looking place.

The town of Langston is almost as sad as Ninnekah, and if not for the university there, it would have dried up a long time ago.  But, Langston University keeps the town alive, and on top of that, the school boasts some pretty impressive ’60s architecture, like these buildings designed by the Oklahoma City firm of Reynolds & Morrison: 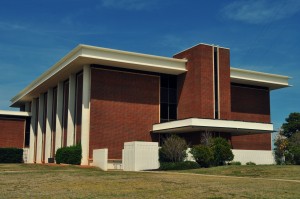 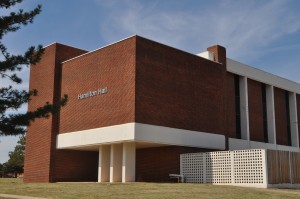 And, off campus, there’s this sweet bit of modernism, the Baptist Student Union: 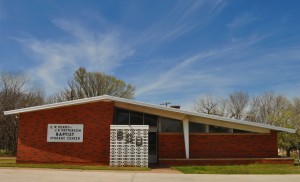 I really like McAlester and have been pleasantly surprised to find some modern goodies there.  First up is the Arch S. Thompson auditorium, designed by Collins, Flood & Associates.  Built in 1963, this well-loved gathering spot in town hosts for all kinds of school and community events. 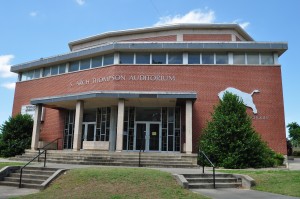 While that’s a nice building, this next one is, by far, my very favorite building in McAlester and one of the best structures in the state — the Art Moderne Supreme Temple of the Rainbow Girls: 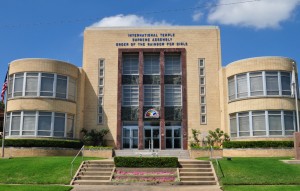 Oh wow, how great is this building?!  It’s on the National Register, and Robyn has provided this blurb about the Rainbow Girls and the building itself:

In 1922, Reverend W. Mark Sexson founded the International Order of the Rainbow for Girls to promote faith, hope and charity in the daughters of Masons.  It had grown exponentially by 1951 when the world headquarters building designed by Tulsa firm Black and West was dedicated by Rev. Sexson in McAlester.  The rounded side wings with seven windows are a symbolic nod to the Rainbow and its teachings, and the building materials coming from various locations in the U.S. and Europe reflect the national and international composition of the Order.  According to “A Dream Come True,” a booklet about the building published around 1954, the temple’s red granite came from Cold Springs, Minnesota; the brick from Henderson, Texas; the stone from Bloomington, Indiana; the marble from Vermont; the terrazzo chips from Italy; the hardware from Connecticut; the tile from California; the doors from New York; the aluminum windows from Miami, Florida; and, the roofing and soil from Oklahoma.  In 2013 the building was added to the National Register and Oklahoma Historical Society spokesperson Linda Ozan called it an “excellent example of mid 20th century moderne architecture.”

Well, there you go.  Here’s a rendering of the temple I found in the OPUBCO collection at the History Center: 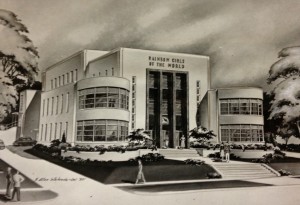 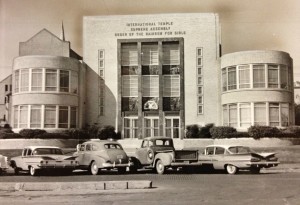 Okay, it’s not a building, but being a sign lover, I have to share this Googie goodness that I found while bumming around McAlester: 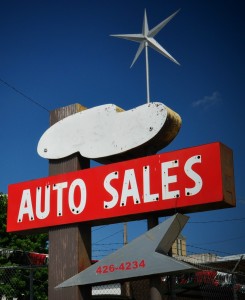 Hennessey is a pretty darned small town comprised of mostly turn-of-the-20th-century brick buildings and fabricated junk from the last couple decades, so not much is there, but I did find this delight: 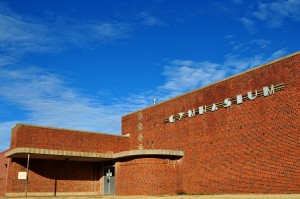 This WPA-funded gym was designed by Walter Vahlberg, uncle to fellow architect and future partner, Robert Vahlberg.  Robert designed the Vahlberg House in Edgemere Park that we toured awhile back. As for the gym his uncle Walter designed, it was built just before the war began in 1941.  Although it is now closed, I looked through the windows and was awed by how original the interior looks — wooden bleachers, an old score keeper on the back wall, etc.

You really have to look hard to locate mid-century commercial buildings in Seminole, but I did find this sweet structure just off the main street downtown: 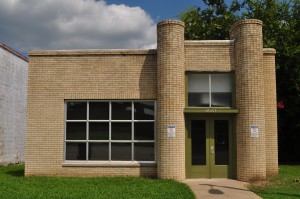 It really reminds me of the cute doctors’ building on NW 13th and Hudson.

I had better luck locating MCM homes in Seminole.  A drive around a few of the older neighborhoods yielded this beauty tucked away in a neighborhood of wood-sided homes: 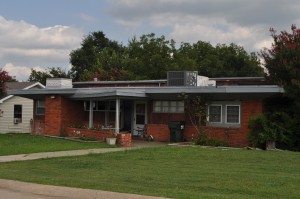 If you squint and pretend that awful air conditioning unit isn’t there, you can see just how cool this house is.  Built into a hill, it is two levels — the bottom level in the back that looks like it houses a garage and workshop.  Needs work but it sure has potential.

An addition to this beauty, I found several sprawling, mid-century ranches in a neighborhood that sits next to the town’s golf course: 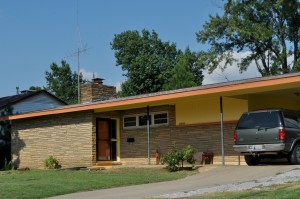 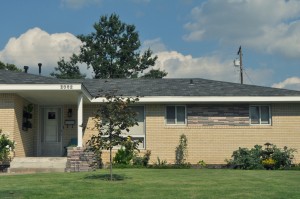 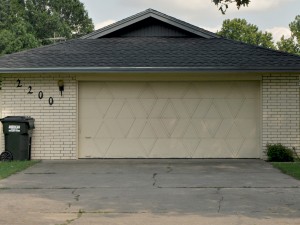 The last stop today is our neighbor to the north, Guthrie.  Although famous for its plethora of red brick Victorian architecture, Guthrie can claim a few modern gems, as well.  Just off the main corridor of turn-of-the-20th century delights is the Masonic Lodge, designed by Dow Gumerson, and built in 1956: 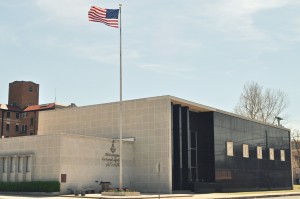 Here’s a vintage photo of the building soon after it was completed: 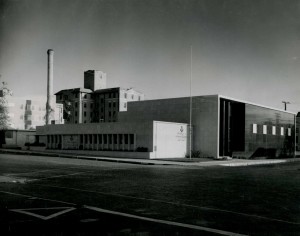 Gumerson also designed the neighboring Masonic Home for the Aged: 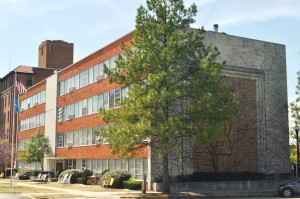 Here’s a similar view from the time the building was constructed in 1956: 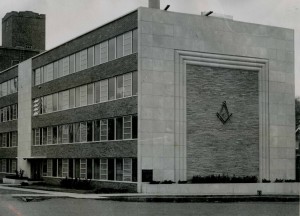 It looks like both Masonic buildings are in great original condition and are being very cared for while still serving their original functions.

Here’s one final mod in Guthrie that is directly across the street from the above buildings: 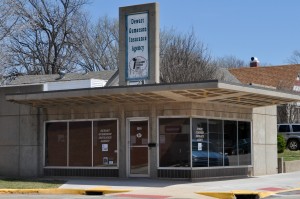 Well, that’s it for the tour for today.  Soon, we’ll be blogging about more small town mod in such hopping hamlets as Atoka, Pauls Valley, Tahlequah, and Marlow.