The United Founders Tower and the Architecture of Hudgins, Thompson & Ball, part 2

by Robyn Arn and Lynne Rostochil

This week, we’re wrapping up the Founders Tower slideshow we presented a couple of weeks ago at the Fitzsimmons Architecture annex.  (Read Part 1 of our blog devoted to HTB.) 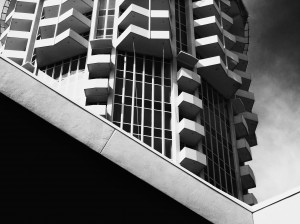 In 1961, the United Founders Life Insurance Company purchased a 60-acre tract west of May Avenue and north of Northwest Expressway for $600,000.  The area had recently become home to Baptist Memorial Hospital and several new suburban neighborhoods and United Founders president, Horace G. Rhodes, envisioned a multi-use development that would be pedestrian friendly and include living, office, retail, and recreational space surrounded by fountains, plazas, and greenery.  The project’s flagship project for the complex would be United Founders’ new office tower, designed by Hudgins, Thompson, Ball & Associates (HTB).  Here’s the building under construction in 1963: 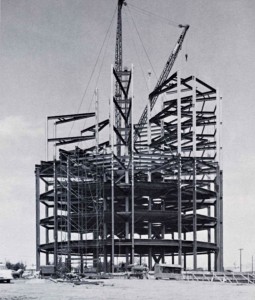 When Founders Tower opened in 1964, it was heralded as one of the best examples of modern architecture in the state.  At 20 stories, it was also the third tallest building in Oklahoma City: 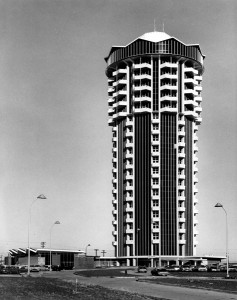 Comprised of 35,000 square feet of glass and 1,500 windows, the $2.5 million tower was the tallest building constructed in Oklahoma City in 30 years and could be seen on a clear night as far away as Norman, Guthrie, and Kingfisher.   Upon its opening, newspaper ads announced that several businesses would be located at Founders Tower, including Rainbow Travel… 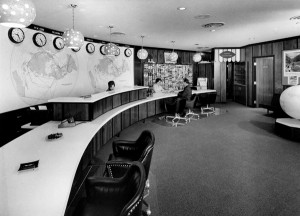 … Johnnie’s & Dottie’s Grooming for Men, the Sans Souci Salon, and Anna Maude Cafeteria (soon to be the famous Queen Ann) as first-floor tenants.  Here’s the interior of the popular Queen Ann, which thrived until the building was bought for a condo conversion in 2006: 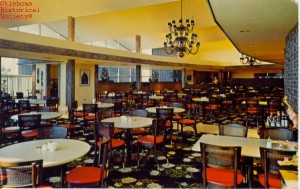 The rest of the building’s 140,000 square feet was devoted to offices, each with its own balcony, including six floors for Mr. Rhodes and the United Founders Life Insurance Company.  Also, a luxurious penthouse suite was available for visiting VIPs and a basement-level secretarial service and health club were available to all tenants. Because it was located on a high point in town, HTB designed the top two floors of the Founders Tower as a rotating restaurant, which became the ultra-exclusive, members-only Chandelle: 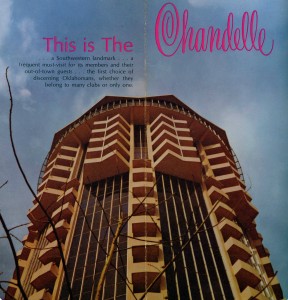 Only the fourth rotating restaurant in the world when it was constructed (along with Seattle’s Space Needle, La Ronde in Honolulu, the Fairmont Hotel in San Franscisco, and one in South America), engineers at HTB had to innovate the 20th-floor restaurant’s revolving mechanism themselves; they decided on a plan similar to the Space Needle’s, where the rotating floor was set on tracks and powered by several 10 1/4 horsepower motors.  This design allowed the 188 seats on the nine-foot-wide outer rim of the restaurant to smoothly rotate one revolution an hour, giving diners a unique, 360-degree view of the city.  The opulent Chandelle was the place to be seen in the mid-’60s, and many a dignitary and celebrity enjoyed listening to tunes by the swanky Al Tell band while enjoying fabulous fare and, of course, the magnificent views:

A private club, the Chandelle offered a variety of memberships: Lifetime: $122 Annual: $24.40 Company: $20 for the company and $10 per person   I love this Oklahoman ad inviting new members to join the Chandelle Club.  There’s a hint of terror in her eye like she’s imbibed a little too much while sitting at a rotating table and suddenly stands up to find acute dizziness taking over, threatening to ruin her perfect flip if she ends up taking a tumble: 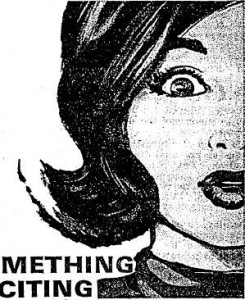 Speaking of boozing it up and this being Oklahoma in the ’60s, there were some pretty crazy liquor laws in effect at the time that created all kinds of problems for club owners.  As with other restaurants and drinking establishments, the Chandelle functioned “on the purchase order system, with the club manager (Connie Riggs) designated as purchasing agent for each member.”  Apparently, ole Connie didn’t care much for the policy, however, because shortly after it opened, the Chandelle was raided when waiters served undercover agents liquor straight from the bar (and not their own bottles).  That was really illegal … and the police cared to enforce such silliness?  It’s hard to believe, but I guess so.  Anyway, the raid resulted in the confiscation of nearly 100 bottles of whiskey and dozens of bottles of other spirits.  Because the club got caught operating as an “open saloon,” the owners were fined $500, but one brazen and maybe half tipsy club member sued the City for the return of his liquor.  Wonder if he won….

At night, the stunning Founders Tower lit up like a Christmas tree, with 200 floodlights at the base of the building illuminating upward and 40 at the top that extended “out to give the appearance o a crown of jewels.”

Though the original vision for the Founders Tower area as a tree-lined, multi-use space didn’t pan out, it was eventually developed with other visually complementary commercial (mostly medically related) buildings and the oh-so-sexy Continental Theater, which sat abandoned for years before being demolished in 2006: 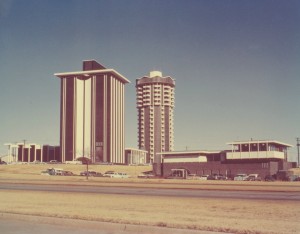 There was also the Northwest Hi-Way Drive-In next door and the Hilander Bowling Alley (where Beverly’s is now) across Villa.  Here’s a view of the corner of Independence and NW Expressway in the late ’60s: 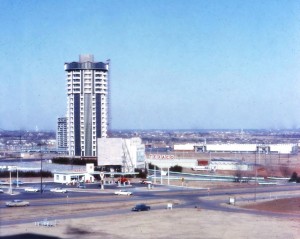 When the drive-in theater was being built, homeowners backing up to the new venue protested, claiming that the noise and traffic would be overwhelming.  The ingenious theater owners appeased the protestors by offering to install speakers on their back patios so that they could watch movies for free and from the comfort of their own homes.  That quickly quelched all protests, and the homeowners and drive-in lived peacefully together until the theater closed in the late ’70s (the lot is now home to the Marriott … or whatever it has recently changed its name to). Here are a few Then/Now shots of views from the Founders Tower — the “then” shots were taken in the mid-’60s, while the “now” shots were taken in 2011. 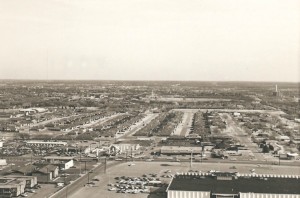 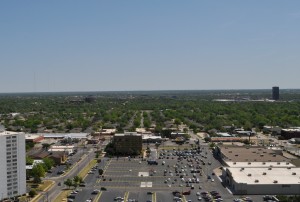 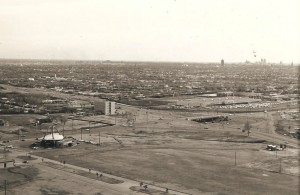 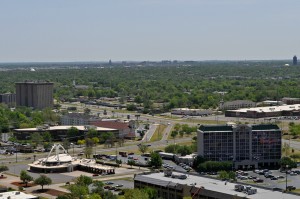 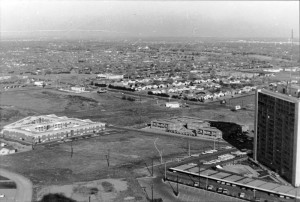 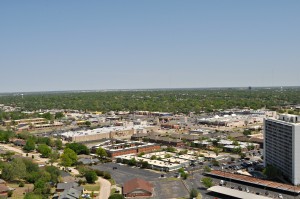 The commercial anchor of the area, the Founders Tower remained a popular office complex through Oklahoma City’s economic ups and downs, during which many of its fellow buildings were razed or renovated beyond recognition, but by the beginning of the millennium it was apparent that a change was needed for the four-decade-old structure.  It was purchased in 2005 by Bridgeport Development, who then hired Richard Brown Associates to transform the former office building into condominiums.  During the renovation, the only change to the exterior was the black curtain wall, which received a light blue-green, energy efficient glass replacement. 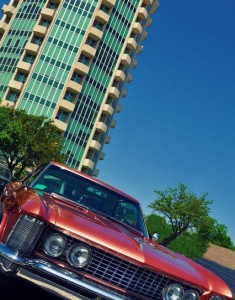 The refreshed Founders Tower re-opened in 2007 to great acclaim and has been a model for illustrating how effectively Oklahoma’s mid-century buildings can be re-adapted for new uses: 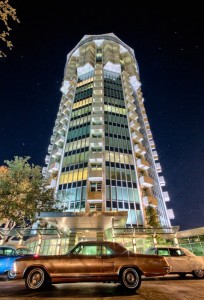 Recently, the Mod Squad acquired an original model of the Founders Tower: 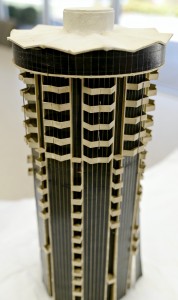 In the ’60s, A.D and Azalee Thomas were the lucky owners of a home that backed up to the Founders Tower construction site (lucky because they also received one of the speakers from the Northwest Hi-Way Drive-In).  At the time, there was a greenbelt that separated A.D.’s backyard from the commercial area that included the tower, and he would mow the green expanse whenever it became unruly.  While mowing one day, he noticed something interesting peeking out of a dumpster near the tower … a model of the newly completed building.  Thinking that his grandchildren would enjoy playing with the model, A.D. rescued it from the dumpster and took it home.  Luckily for us, his grandchildren weren’t very interested in the model as a toy, and it quietly sat in his —  then his son, Joe’s —  garage for decades until Joe’s wife, Jonita, contacted The Oklahoman’s Steve Lackmeyer about donating it.  Steve immediately thought of the Mod Squad and contacted Lynne, and that’s how we got this incredibly rare piece of mid-century modern Oklahoma history.  Although some of the building’s 170 balconies are missing and it’s a bit bunged up here and there, the model is in incredible condition and plans are in the works to restore it soon.  When that happens, we’ll have another Mod Squad party to celebrate!

A huge thanks goes to Joe and Jonita for keeping the model safe all these years and for gifting it to the Mod Squad: 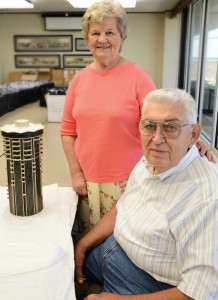 The United Founders Tower and the Architecture of Hudgins, Thompson & Ball, part 1 Soon-To-Be On the Market: The Sallis House
Click here to go back to previous page