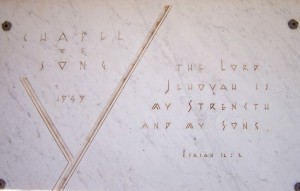 As the college campus filled up with buildings during its first 50 years, many students and faculty saw the need for a non-denominational chapel where people of all faiths could go to reflect and enjoy a peaceful respite amid all of the frenzy of classes and activities.  But because, then as now, religious facilities couldn’t be funded with state money, students would have to raise the cash to build the chapel on their own.  In 1941, the Young Women’s Christian Association (YWCA) voted to donate $1,500 toward the building of the chapel and the Young Men’s Christian Association (YMCA) joined in with a similar donation.

Soon, students were hosting swap meets and faculty “slave sales,” producing performance benefits, and walking the streets of downtown Edmond soliciting contributions from business owners and citizens to help raise funds.  They also contacted Oklahoma City architect, George Winkler of the firm Winkler & Reid, to draw up plans for the chapel to be built in an English cottage style.  To help defray some of the building and labor expenses, students received a Works Progress Administration (WPA) grant for construction costs in anticipation of construction work beginning in April 1942.  However, with the outbreak of World War II, all plans for the chapel were put on hold just as many of the students left to serve the war effort in a variety of capacities.

Even though construction was placed on hold for the duration, initial work on the windows moved forward.  Students began by drawing their designs for 14 stained glass windows on sketch paper in pen and ink.  Initially, they planned to go with Old World biblical themes, but when they realized their talent would never come close to matching work done by the masters in Europe, the students began to brainstorm new ideas for the stained glass windows.  Finally, one student came upon an idea that resonated with all of the project artists: why not base the panels on meaningful songs of inspiration?  Songs such as “Swing Low, Sweet Chariot” were agreed upon, and others would work together to depict the life cycle: infancy would be represented by “We Three Kings of Orient Are,” marriage by “Bells of St. Mary’s,” maturity by “Lead, Kindly Light,” and immortality by “Christ Arose.”   The use of these hymns also gave the chapel its official name: the Y-Chapel of Song.

While making their initial sketches, the artists used fellow students, faculty, and even Edmond residents as models for all of the faces in their designs.   Once a sketch was finished, it was placed on an opaque projector and enlarged to the actual size of the proposed panel.  Students then traced the design onto brown craft paper and painted it as they wanted the final stained glass window to look.  These became the working plans for the panels.  Once the working drawings were complete, students created a template for each piece of glass in each panel and sent them off to Emil Frei, Inc., in St. Louis, who supplied the glass and cut the pieces according to the templates.  Originally, antique glass imported from England and France was going to be used, but when a German ship sunk the boat carrying the first shipment of glass to Emil Frei, mostly good ole’ American glass was used instead.  Finally, once Emil Frei cut the glass, it was shipped back to Edmond to be assembled by the students, with OKC’s own Victory Glass Company doing most of the leading for the project. 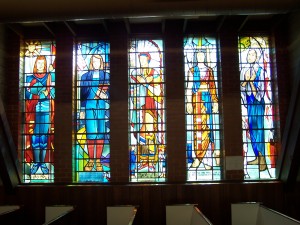 As with every other campus in the nation, UCO suffered the loss of many of its alumni during the long years of battle, and the students who returned home to resume their studies were forever changed by the experience.  So, it seemed more important than ever to finally build the long-awaited campus chapel.  By 1947, students had raised $45,000 for the new chapel, far short of the goal they needed to complete Winkler’s design.  Desiring to build sooner rather than later, they approached a pair of young Oklahoma City architects, R. Duane Conner and Fred Pojezny, to come up with a simpler design that the students could afford to construct right away.  Both Oklahoma natives and OSU graduates before the war, Conner and Pojezny set up shop together in 1946 shortly after they returned home from their wartime assignments.  While Conner spent the war years working as a design engineer for the Manhattan Project in Oak Ridge, Tennessee, Pojezny saw combat as a Navy officer aboard the U.S.S. Prometheus.

The firm had recently completed one of their first assignments as architects, the very modern Industrial Arts building on campus, so they were familiar with the chapel project and enthusiastically agreed to lend their services in creating a much more sleek and affordable Y-Chapel of Song.  The new design was for an a-frame, red-brick building set among shading elms at the center of campus that would showcase the student-created stained glass panels on all four walls.  With four walls of glass surrounding meditating students and providing a calming, ambient light, the architects hoped to create a space that would be harmonious, natural, and most of all, welcoming. 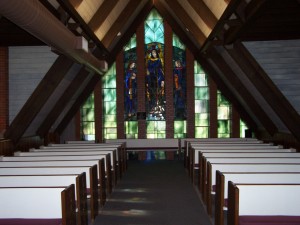 As for the windows, while some depicted the spiritual songs mentioned earlier, many showed some of the diverse cultures (Asian, African-American, Hispanic, Native American) that make up the great American melting pot.  In addition, the panels illustrated such modern-day themes as how to live a well-behaved life through labor, intellectual interests, church activity, civic and family duties, and service in the Armed Forces.  Finally, an entire wall of windows was created showing a variety of women as strong, independent, and capable, which seemed more than a little ironic considering that post-war attitudes now demanded that Rosie the Riveter hang up her drill and get back into the kitchen. 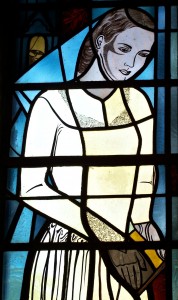 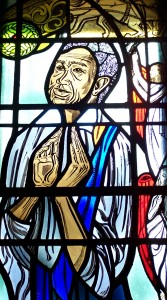 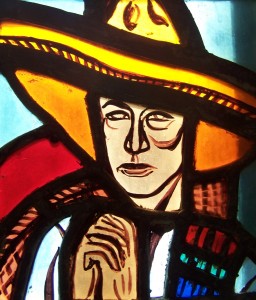 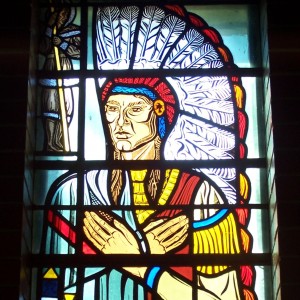 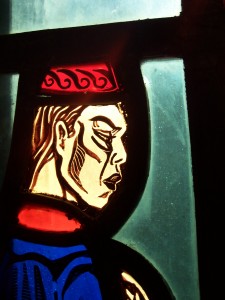 After seven long years of planning and fund raising, building finally began in the winter of 1948. To outfit the new chapel, students in the Industrial Arts department designed the pews and other furnishings, while the Metal Work department contributed the decorative organ grill, and other students and faculty gifted paintings, flags, etc., in honor of fallen loved ones.  When it was completed in the summer of 1949, students, professors, alumni, family, and citizens came together to dedicate the Y-Chapel of Song to the brave UCO students who did not return from the battlefields of World War II.  When Washington art critic, Lura Beam looked at the stained glass windows showing such diversity, she exclaimed that she knew of no other memorial that stressed youth like the Y-Chapel of song and called the building and its magical panels, “the most inspiring thing I’ve seen in Oklahoma.” 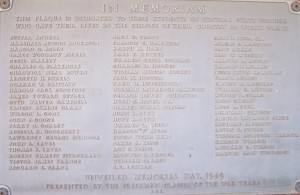 Soon after the dedication, Conner deemed the new Y-Chapel of Song “a natural building… a finger pointing the direction of an organic American architecture.  In all respects a modest, quiet little building … yet with an uncompromising integrity in its honest expression of purpose and structure, it is a congenial place for congenial activities. It will not grow out of date but will remain young for years to come.”  The architectural community obviously agreed because the simple little chapel won the Outstanding Building/Religious award from the Oklahoma AIA in 1953.

Since its completion, the Y-Chapel of Song has served its community well by welcoming countless weddings, memorial services, and quiet meditations in its thought-provoking and peaceful space, and it continues to provide a quiet oasis for students to this day.  In honor of the unusual stained glass windows and the simple-but-elegant building that houses them, the chapel was the first Conner & Pojezny design to be added to the National Register in 2001. 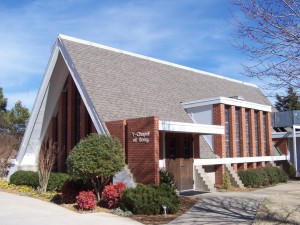 On the Market: The House of Good Taste Mid-Century at the Museum: Must-See Exhibits in 2014
Click here to go back to previous page