After my weekend in NYC last fall (posted in an earlier blog), I hopped a train to Pittsburgh.  Touring the city was fun, but the real purpose of the trip was to make it to Fallingwater in the woodlands of southwestern Pennsylvania, a “bucket list” item I was excited to cross off.  Most of us have read about and seen photos of Frank Lloyd Wright’s 1937 masterpiece built for Edgar and Liliane Kaufmann, but like so many things, to get the full effect you must see it in person.  I chose to take one of the early morning tours that permit photography.  Being one of the first people on the property was especially nice because by the afternoon it gets very crowded.  From the tour center, you slowly make your way down a curved, tree-lined path. 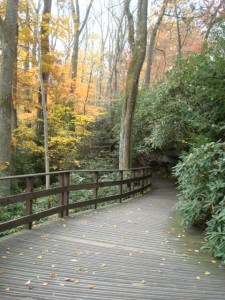 At the bottom, you reach an open field that used to be a swimming hole.  Past the field, you meet and then walk parallel with the flowing water.  The guide said this way of entry was deliberately planned by FLW to ease the visitor onto the property and set them up for the first view of the house.  Worked like a charm.  In fact, it felt like a religious experience to me – the absolutely brilliant blending of nature and man’s creativity. 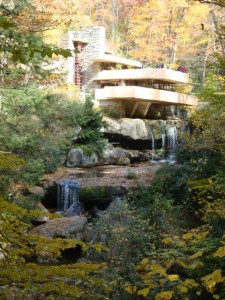 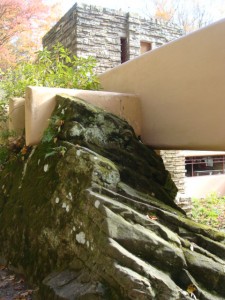 Inside the home, Wright’s formula of constricted space releasing to light filled, open areas was displayed in several ways.  This interior staircase was especially compact, and felt almost medieval to me. 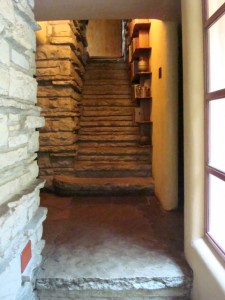 In many of the rooms, the filtered light caressed the beautiful objects that Mrs. Kaufmann had “curated” and created such a gentle warmth you wished you could sit and stay a spell (unfortunately, that was not part of the admission). 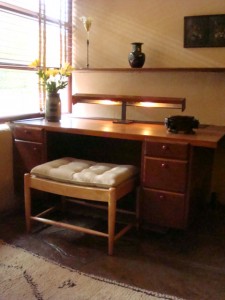 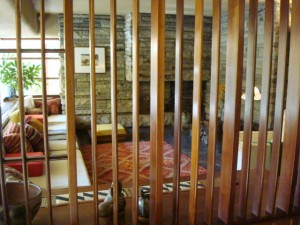 The majority of these cozy living areas had access to the terraces, another way the contrast of constricted space to open area was exhibited.

Even though there was consistency in materials and colors, there was also an amazing variety in shapes and designs.  For example, though there was a fireplace in almost every room, each one was unique.  Wright considered the big impact as well as small details, creating charming surprises throughout. 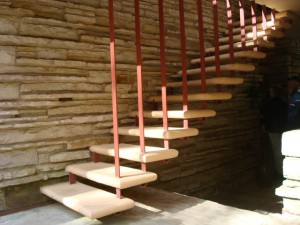 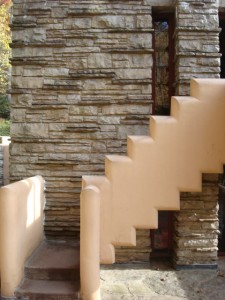 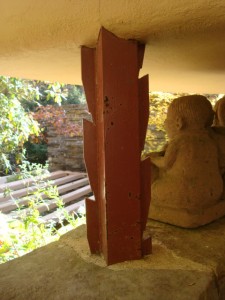 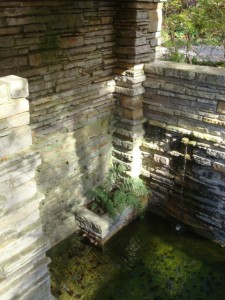 The Kaufmanns were obviously imaginative and thoughtful people.  Not only do they have this sublime property as their legacy, in 1946 they commissioned Richard Neutra to build their Palm Springs getaway, another architectural masterpiece.

Just a short drive away, is another of Wright’s gems, Kentuck Knob.  This more modest home was designed for I.N. and Bernadine Hagan in 1954.  It is now owned by Peter and Hayat Palumbo and is used as a repository for their art and historical artifacts.  The landscape is cleverly outfitted with major contemporary sculptures that would rival many museums. 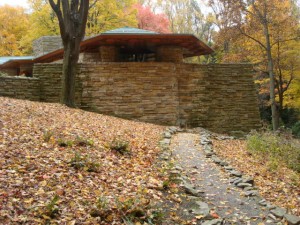 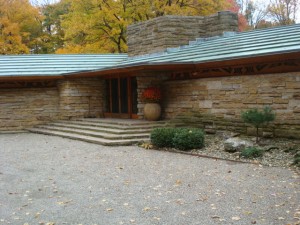 Unfortunately, interior photos weren’t allowed on this tour.  The west wing (to the right of the entry) is dominated by the central hearth and large living area with access to a full length terrace.  Behind the fireplace is an angular kitchen with masonry walls that go up fifteen feet, then topped with a skylight.  Three extremely cozy bedrooms are in the east wing.  Typical of FLW, built-ins are abundant and fairly necessary in this hexagonally inspired layout.  But the design and craftsmanship are so lovely you would hardly miss that inherited antique buffet. 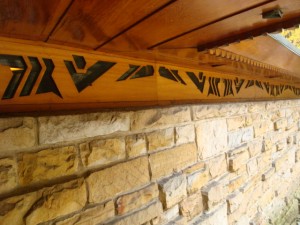 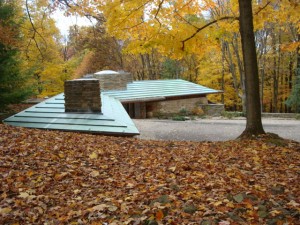 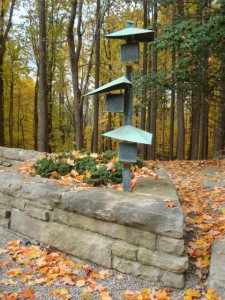 Art in Architecture: The Rendering Mod Squad Tour: The Vahlberg House
Click here to go back to previous page