Mid-Century at the Movies — Five

What’s better than watching an old movie on TV and being surprised by a great bit of funky modern design or great mid-century architecture?  Not much, I say.  Well, that’s just what happened when I tuned into Turner Classic Movies (TCM) last week to watch an independent little movie about nuclear annihilation called “Five.” 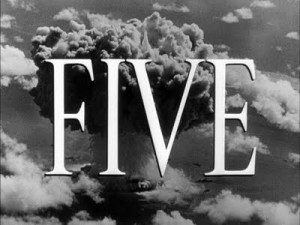 First, I have to admit to having a morbid fascination for post-apocalyptic movies made in the 50’s and 60’s when the prospect of nuclear holocaust seemed imminent — movies like “Panic in the Year Zero”; “The World, the Flesh, and the Devil”; “The Last Man on Earth”; “On the Beach”; and “Ladybug, Ladybug” rank high on my favorites list.  But, I had never heard of “Five” before and was pretty excited to check it out when it aired on TCM.  Well, not only did I get to watch a pretty great movie about the end of the civilized world, but I also got the added benefit of lusting over one of Frank Lloyd Wright’s masterpieces throughout.

Written, produced, and directed by Arch Oboler, who gained fame in Hollywood as a radio teleplay writer and producer in the 40’s … 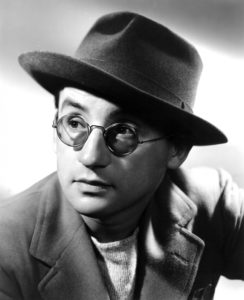 … “Five” was filmed in 1951 entirely at his Wright-designed home in the treeless mountains near Malibu.  Wright originally designed a home (see sketch below), studio, film processing studio, gatehouse, and stables for Oboler, but only the gatehouse and studio were built by 1941 when the war broke out and building materials became scarce.  Although the rest of the complex, built on Oboler’s 300-acre spread and called “Eaglefeather” by Wright, wasn’t finished, Oboler and his family moved in anyway and after the war, he saw his isolated home and property as the perfect location to shoot the script he had penned about life after nuclear disaster. 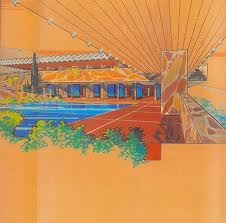 “Five” is the story of the only survivors of a nuclear war — one woman (Susan Douglas) and four men (William Phipps, James Anderson, Charles Lampkin, and Earl Lee).  After months of wandering alone through the devastated landscape of the post-apocalyptic world, somehow each of the survivors finds his/her way to the peaceful, quiet sanctuary of “Eaglefeather.”   All five find solace and a new beginning at the lonely house in the hills overlooking the Pacific Ocean and work to build a new community together, but prejudices, jealousies, greed, and the need to find other survivors unravel the quintet’s tender alliance with devastating consequences.

Perhaps unintentionally, Oboler’s shoestring budget gives “Five” (which has been touted as the first post-apocalyptic movie ever made) a verisimilitude and poignancy that makes it as powerful and relevant today as it was when it was made over 60 years ago.  The tight camera angles and creative lighting, along with the understated but effective acting by the film’s virtually unknown stars, work together to make for a very compelling movie — one that is certainly better than a big studio of the day would have put together on its elaborate sound stages. 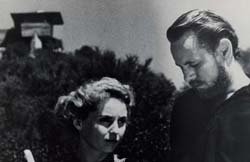 Sadly, when it was released, “Five” came and went and was quickly forgotten by the public and remains little known today.  Never deterred by a failure, the determined Oboler quickly moved on to making other independent features, including the first 3D movie, “Bwana Devil.”  With his earnings as a writer, producer, and director, he intended to complete the building of “Eaglefeather” and even began excavating the site for the main house in the mid-50’s.  However, all of those dreams died when his six-year-old son, Peter, drowned in an excavation hole on the property in 1958.  The family, including Oboler’s wife, Eleanor, and their three remaining sons, continued to live there until the writer and director’s death in 1987.

Since then, “Eaglefeather” has changed hands many times, with each successive owner doing little to maintain the gatehouse and studio.  However, the most recent posts I’ve found about the house indicate that the latest owner is restoring the existing buildings and plans to construct the rest of Wright’s design in the future.

Here are some photos on Flickr of the Oboler house taken in the last few years:

And, here’s the Oboler house on Googlemaps:

As for the movie, “Five,” it is not out on DVD, but you can keep an eye out for it on TCM, which shows it every once in awhile, or view it on You Tube for a fee:

It appears that the Oboler House has been destroyed by a California wild fire.  Read about it here and here.

Postcards of Lost OKC Dean Bryant Vollendorf … WHO??
Click here to go back to previous page