Consternation and Bewilderment in Oklahoma — The Ledbetter House

This is an article and photo essay from the June 28, 1948 issue of Life magazine.  Thank you, Mike Brown, for letting us in on this great find!

Consternation and Bewilderment in Oklahoma 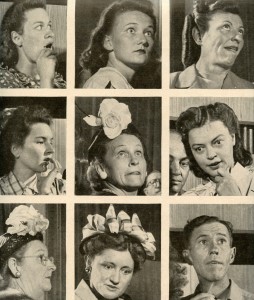 A large crowd gathered to look at something in Norman, Okla. last month.  Norman is a college town (University of Oklahoma) and hence more hardened to strange sights and unexpected doings than the average U.S. city of 22,000.  Nevertheless some 14,500 persons, including visitors from surrounding areas, the biggest nonathletic crowd in Norman’s history, stood in line to look and, as the photographs above show, to register many degrees of surprise. 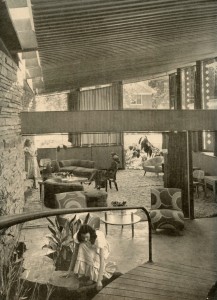 Set down in a conservative neighborhood, its ramp, pool and disc roofs jar the sightseers 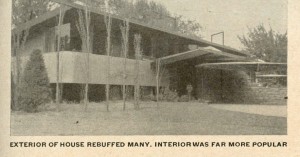 What popped Norman’s eyes last month was a new house which had been designed for a well-to-do oil man, H.E. Ledbetter, by Bruce Goff, one of the most imaginative and individualistic architects in the U.S.  Goff, who believes that modern architecture has itself become far too stereotyped, incorporated in the Ledbetter house such things as a pool into which water drips from stones set in a wall, a wooden ramp instead of a staircase, windows set at an angle in the wall to catch the prevailing southeast breeze, mysterious big aluminum discs and corrugated aluminum panels.  The interior walls, almost none of which run all the way up to the red cedar ceiling, are clear plate glass with curtains which can be pulled for privacy.  Some doors are actually flexible screens.  The small glass insets in window and door panels turn out to be dime-store ashtrays. 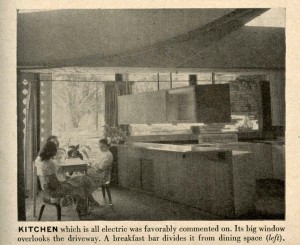 Despite this last concession to economy, the owner ran into cost trouble.  Originally planned for about $15,000, Ledbetter knew even before construction began that the cost would be at least $33,000 and he now estimates, with the landscaping completed, it will be around $60,000 (which would be over $550,000 today).  He has abandoned all thought of living in the house and has put it up for sale.  The recent public inspection, inspire by the tremendous curiosity that the house caused, has held by the American Legion and Alpha Gamma Delta to raise money or a local charity.  During the inspection an elderly lady approached Architect Goff.  “Mr. Goff,” she asked, “Would you live in this house yourself?”  Goff, who is chairman of the University of Oklahoma’s School of Architecture, replied, “Oh my, no.  It’s much too conventional for me.” 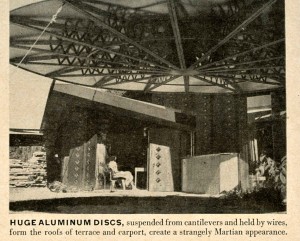 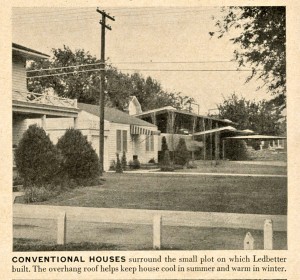 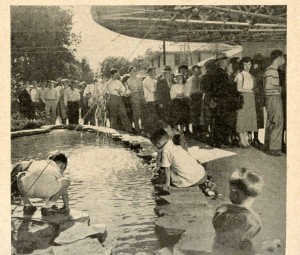 Here are a few images of how the gorgeous Ledbetter house looks today: 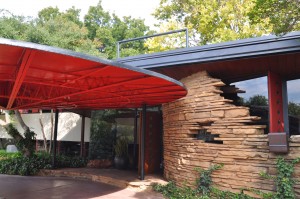 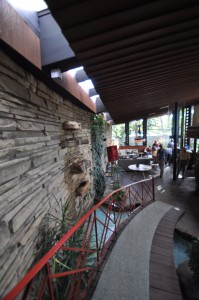 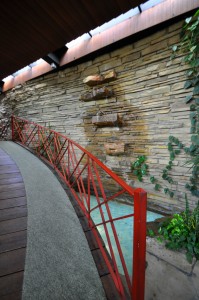 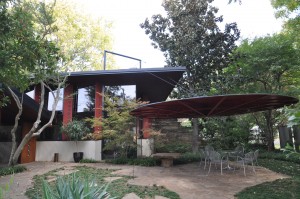