When TV Came to Town 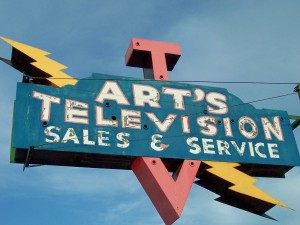 After years of depression and a second world war, Americans were eager for the boom times that came with peace and prosperity.  Returning G.I.’s and their young families began moving into new suburban developments as quickly as they were being built and were soon grabbing up every shiny domestic gadget in sight, from electric hand mixers to washing machines to what many would soon consider the most essential piece of household furniture, the TV. 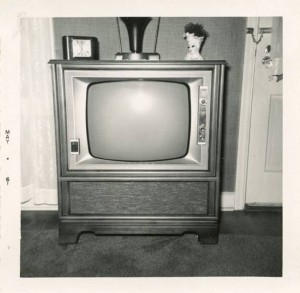 Television was developed in the 20’s and 30’s, but the new sets were so expensive and there was so little being broadcast that they found few buyers.  At the outbreak of WWII, the focus of technology shifted to weapons manufacturing, and the development of TV was put on the back burner for the duration.  All of that would change … and change briskly … in peace time.

In the first full year after the war, 1946, a mere 7,000 sets were sold in the U.S., and two years later, Oklahoma Citians were able to buy personal sets for the first time … if they had the $549 to dole out the privilege of watching very few programs on tiny, 10-inch, black and white screens.  (In today’s dollars, that TV would cost almost $5,100 – ouch!).  As television production ramped up and better, less expensive models began arriving on the market at the speed of Sputnik, that number leaped to 50 million sets being sold by 1960 … and that was before color TV.

With this new, but sometimes unreliable tube technology came the need for TV repair and sales shops, such as OKC’s Munn’s, Art’s, and Walt Durham’s, all of which did a brisk business selling and repairing American-made Admirals, Zeniths, Philcos, and RCAs. 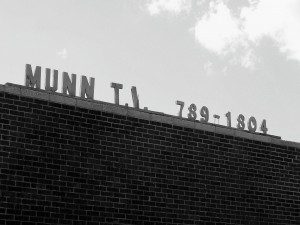 As television became a household staple and the best babysitter a mom could ever hope for, a secondary industry of businesses sprouted up around town.  These businesses sold such items as rooftop antennae and other TV-related accessories, including the cute-but-stubborn rabbit ears that I swear I spent half my childhood wrapping foil around, contorting in all kinds of odd positions, and standing up and pinching for hours at a time to improve reception.

There are no such reception problems these days, and there’s not much demand for TV repairmen, either, so most of the old shops have been closed and boarded up for quite awhile.  However and quite surprisingly, there are still quite a few remnants of their existence to be found throughout the Metro if you look around a little bit.

Every time I drive by the old Munn’s or Art’s, I have to admit feeling a little longing for our late 60’s console Zenith (complete with record player, storage for albums, and monstrous speakers).  It looked something like this: 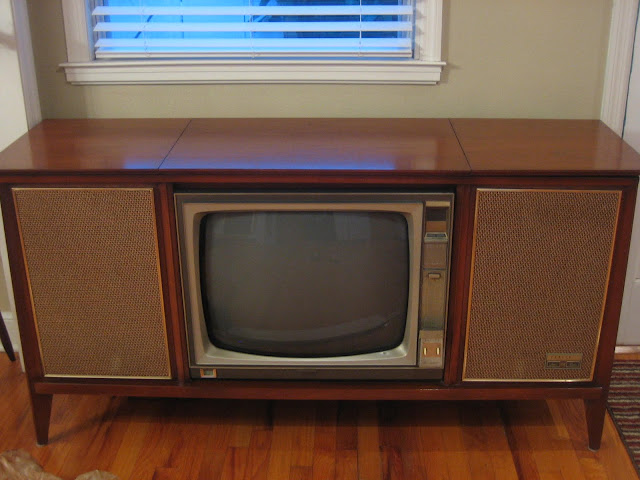 The behemouth took up half our living room and produced a grainy picture at best, which forced the constant aforementioned battles with our sometimes-friend, mostly-foe rabbit ears that I vowed every evening to conquer and rarely ever did.  When I think of that and the hours spent fiddling with the vertical and horizontal, my nostalgia dissipates pretty quickly, and I decide that I’m really very happy for my flat screen and cable TV.

(Thanks to Forever the Hostess for the use of the photo of the Zenith console — http://foreverthehostess.blogspot.com/2011/05/vintage-finds-5182010.html.)