My vintage vinyl find: Conversations Regarding the Future of Architecture. 1956.

I admit, I have a problem. I’m a self possesed Vinylholic. OK, I don’t have a garage full of 33 1/3’s, but I do have an ever growing black plastics collection, many of which were purchased for the cover art alone.  For years now I’ve found myself in garage and estate sales perusing the cat pee smelling houses for that rare Jim Flora “Mambo for Cats”, or Alex Steinweiss “Contrasts in Hi-Fi”. Mostly to no avail.

So it was one of those typical Saturdays last Fall as I elbowed my way through the vultures in some ramshackled shag carpeted mud hut in South OKC that I came upon a moldy cardboard box in the corner of the converted garage, with this inside:

Conversations Regarding the Future of Architecture 1956 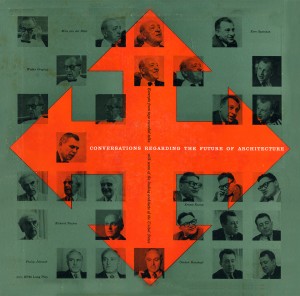 So, here I present to you, the digitized version of this analog vinyl, pops and all, in it’s entirety: Reynolds Metals Company’s 1956 promotional LP “Conversations Regarding the Future of Architecture” 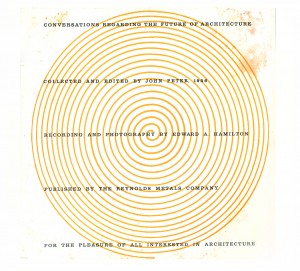 Conversations regarding the future of architecture
Collected and edited by John Peter, 1956
Recording and photography by Edward A. Hamilton
Published by the Reynolds Metals Company
For the pleasure of all interested in Architecture 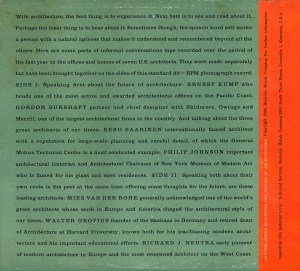 With architecture, the best thing is to experience it. Next best is to see and read about it. Perhaps the least thing is to hear about it. Sometimes though, the spoken word will strike a person with a natural aptness that makes it understood and remembered beyond all the others. Here are some parts of informal conversations tape recorded over the period of the last year in the offices and homes of seven U.S. Architects. They were made separately but have been brought together on two sides of this standard 33 1/3 RPM phonograph record. Side I: Speaking first about the future of architecture: Ernest Kump who heads one of the most active and awarded architectural offices on the Pacific Coast. Gordon Bunshaft partner and chief designer with Skidmore, Owings and Merrill, one of the largest architectural firms in the country. And talking about the three great architects of our times: Eero Saarinen internationally famed architect with a reputation for large-scale planning and careful detail, of which the General Motors Technical Center is a most celebrated example. Philip Johnson important architectural historian and Architectural Chairman of New York Museum of Modern Art who is famed for his glass and steel residences. Side II: Speaking both about their own roots in the past at the same time offering some thoughts for the future, are these leading architects: Mies vand der Rohe generally acknowledged one of the world’s great architects whose work in Europe and America shaped the architectural style of our times. Walter Gropius founder of the Bauhaus in Germany and retired dean of Architecture at Harvard University; known both for his trailblazing modern architecture and his important educational efforts. Richard J. Neutra early pioneer of modern architecture in Europe and the most renowned architect on the West Coast. 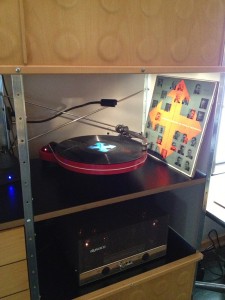 Bruce Goff – Human Architect or Pan-Dimensional Alien Genius? The Treasures You Find Digging Through Boxes of Paper at Garage Sales
Click here to go back to previous page