There’s not much to tiny Olustee, Oklahoma, a small blip on the map southwest of Altus that can’t even claim a street light to lure passing motorists on Highway 6 to stop and hang out a few minutes.  But this small hamlet is where architect Bill Howard was born in 1923 and grew up as one of “the greatest generation;” it’s also the place he once credited for teaching him creativity.  “We saw nature in all of its moods.  We had the outdoors and storms and rain and religious upbringing.  We weren’t burdened with a lot of man-made materialism.”

Whether it came from his childhood on the rural Oklahoma prairie, his experience as an architecture student during the glorious Goff days at OU, or his time as a student of the one and only Frank Lloyd Wright, creativity is something that Howard (who died on August 4th at the age of 89) possessed in great abundance.  He was as prolific as he was creative, designing well over 1,000 buildings during his 50+-year career, including some of the best examples of modern architecture in Oklahoma City.

One of Howard’s early designs was for a modest but thoroughly stunning, Wright-inspired, dark red brick, four-unit apartment building on Harvey Parkway in Edgemere Heights that has, since it was built in 1957, been home to many young, fledgling designers and architects just beginning their careers.  I like to think that, perhaps, living with Howard’s beautiful design day in and day out helped inspire these up-and-comers to create their own masterpieces that have contributed so greatly to OKC’s incredible body of modern architecture — maybe, just maybe.

As for the four-plex itself, the earth-hugging, rectangular structure looks like someone plucked one of Wright’s Usonian masterpieces from the Midwest somewhere and dropped it in the middle of a quiet suburban neighborhood here in the Metro … and it fits in perfectly.  The low slung, flat roof extends outward past the exterior walls to provide a protective barrier to the harsh, often temperamental weather that is so typical here in Oklahoma, while interior windows and sliding glass doors let in gobs of warm, natural lighting.  No wonder some of OKC’s most creative minds wanted to live in such practical but elegant surroundings! 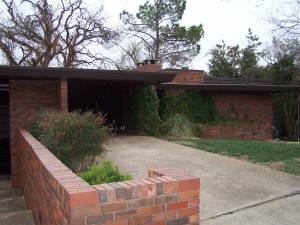 Four years after the Harvey Parkway four-plex was built, Howard (as part of his firm, Howard, Samis & Lyons — later known as Howard & Porch) went to work designing the glittering new Quail Creek Country Club that was about to sprout from fertile farmland in then-rural NW OKC.  Howard wanted a building that would provide visitors with expansive views of the golf course while also sheltering them from the elements. 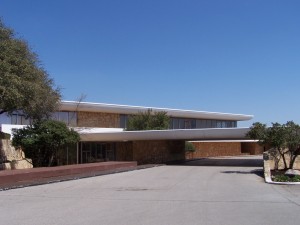 The result is a graceful, native stone and glass masterpiece that is completely casual and vividly awe inspiring at the same time.  The round main level lounge area provides the big “wow” of the building, with 26-foot-tall windows looking onto the golf course, a half-moon-shaped, two story fireplace that could easily warm a small town, and an inviting, semi-circle conversation area where it is way too easy to camp out for long periods of time and devour the scenery.  But, the real beauty of the building is in the details.

Take the intricate woodwork, for example.  All kinds of Wrightian cutouts, crazy angles, and red-stained, notched wood paneling laid in long, horizontal stretches balance the brightness provided by all of the natural light, creating a subdued drama that very successfully accomplishes Howard’s goal of achieving what he called “honest” architecture. 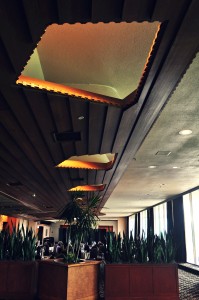 Yes, the Quail Creek clubhouse is one of those rare places where you feel like you’re going somewhere very special, even if you’re only going to hang out by the oversized pool with the kiddos.  The building is such a gem, in fact, that the architecture schools at both OU and OSU regularly organize tours of the now 50-year-old clubhouse for their students a few times a year. 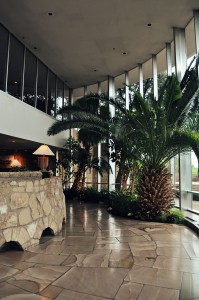 A few years ago, I attended a lecture given at the Quail Creek Country Club by legendary architectural photographer Pedro Guerrero, who beautifully photographed many of Frank Lloyd Wright’s buildings during his six decade career and whose images are displayed throughout the upper story of the clubhouse.  During his talk about his experiences working with Wright, Guerrero looked around the naturally lit room and observed how comfortable Wright himself would feel in such a space.  I’m sure it was one of the best compliments Bill Howard ever had about his work.  (Sadly, Pedro Guerrero died on September 13, 2012 at the age of 95.) 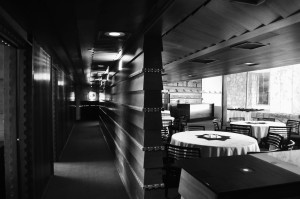 Howard’s own home was built on a wooded lot bordered by a creek on two sides next to the Quail Creek Country Club.  He broke away from all convention and designed a hexagonal, split-level space that, while very dramatic, humbled “itself to the wholeness of the building.”  The result is a nearly 4,000 sf home that is both practical and a real marvel. 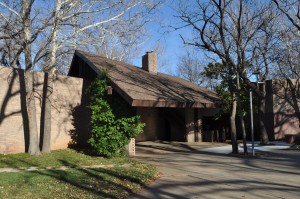 Once again, Wright’s influence is evident throughout, especially in the oblong living room that encompasses an entire wing of the house.  An angled floor-to-ceiling brick fireplace dominates one side of the room, while floating, built-in shelves crawl down the insanely long wall to a cluster of windows and glass doors that look onto the second green.  Hexagonal-shaped Mexican tile flooring throughout the first level of the home grounds the living spaces, while, at every corner, the walls’ layered gray brick X out into nothingness in a completely organic fashion. 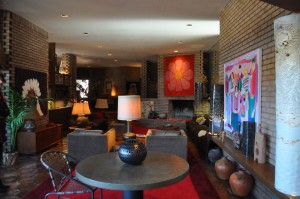 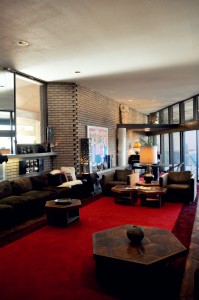 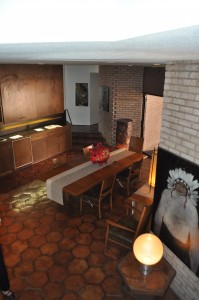 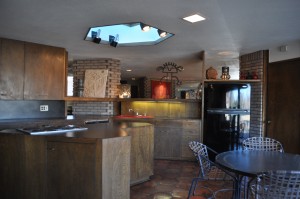 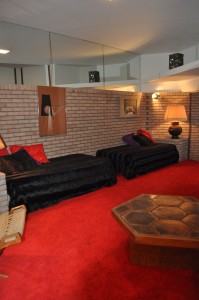 Recognized by the Oklahoma chapter of the AIA as one of the 10 best project designs in the decade from 1975-1985, Howard lived in his beloved “cabin” until he moved to an assisted living center in 2011.  The home is now for sale and awaiting a new owner to love the place as much as Howard did.

Howard also designed the P.R.O.S. Building (now the Jim Thorpe Association and Oklahoma Sports Hall of Fame) at 4040 N. Lincoln.  Here are a couple of vintage photo taken by architect Bob Bowlby soon after the building was completed in 1962: 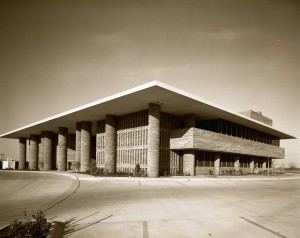 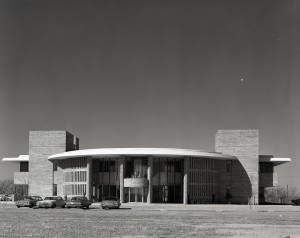 And the building today: 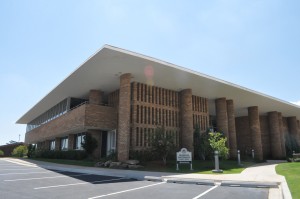 In addition, he designed the Brutalist main Post Office that was demolished a few years ago to make way for OKC’s downtown Central Park … 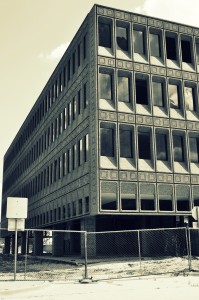 … and the football-shaped Sunbeam Family Service Center, which was completed in 1965: 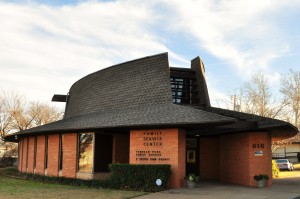 Howard once said, “I hope, out of my search, comes a new expression of emotion, of truth, of life, of spirit.  If I can show a person something he hasn’t seen before, then I have succeeded.”  From the legacy of great design he has left behind in these and many other buildings in OKC (many that you’ll soon be seeing on OKCmod.com), I’d say that Bill Howard succeeded … and very brilliantly, too.

Okie Mod Squad is Online!
Click here to go back to previous page